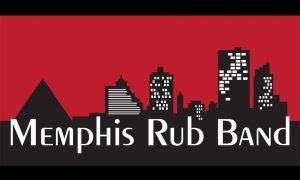 The Memphis Rub Band is a fun way to spend a night listening and dancing to a wide range of blues-based musical genres. Suncoast Blues Society presents a review of two recent shows, at Blue Rooster and Stottlemyer’s Smokehouse, both in Sarasota.

Long-time local club goer’s have likely had the pleasure of attending a Memphis Rub Band (MRB) show. With many new residents in the area Suncoast Blues Society believes the time is right to share highlights from recent shows.

The band consists of bassist Scott Matzke, guitarist “Hurricane” Gary Drouin, keyboardist Dan Ryan, and its newest member drummer David Wells. The band was formed in 2016 by Gary and Scott to perform blues, rock ‘n roll, and a healthy mix of funk, and rhythm and blues.

In many ways this band may be the perfect vehicle to introduce your friends who claim they do not like the blues, to the blues. There is something for everyone in the set list, most of the songs have blues roots and are performed where appropriate with a blues feel.

Vocals are mostly performed by Scott, and David adds vocal variety to the mix by singing from the backline. The MBR spin is throughout the set list and the show includes original songs from the 2018 release Taste.

From the deep blue’s catalog, the band performs a nice version of Magic Sam’s “Just a Little Bit”. Switching to soul/R&B, MRB set included Otis Reading’s hit “I’ve Got Dreams to Remember”, and the Rufus Thomas hit “Walking the Dog”.

The shows included MRB band originals “Packing Heat” and the song “Red Tide Blues” which received airplay on local stations. David Wells sings the J. Geil’s Band song “So Sharp” and at Stottlemyer’s kicked in with The Band’s “The Weight”.

I enjoyed songs from two personal favorites. The band pays homage to Coco Montoya with “Back in a Cadillac”. And multiple songs from Delbert McClinton. Both are unusual choices for a band that plays blues-based covers and it shows the depth of their musical knowledge and the talent to properly honor these artists.

Depending on the whim of the band one may hear Delbert’s “Giving it up for your Love”, and “Shaky Ground”, which while a Temptation’s song is now so much a part of Delbert’s shows that he “owns” it. Delbert’s classic “Old Weakness (Coming on Strong)” is a particular specialty of the band.

Also performed was the soulful Curtis Mayfield & The Impressions song “People Get Ready”. The Master of the Telecaster, Albert Collins, is featured with his “Love Me Like You Say” and most will recognize MRB’s version of The Rolling Stones funky hit “Miss You”. Dan took the lead on the Booker T. & the MG’s hit “Green Onions”.

Word is the band is working on a new recording. Scheduled shows for Memphis Rub Band include: