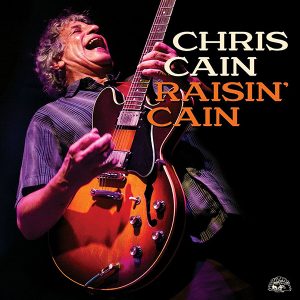 Chris Cain returns with a superb recording. The lyrics are crisp, sometimes cynical, always witty, and will hit the mark for those who have been in a relationship for any length of time.

Blues Magazine quotes Chris as saying “These are the best pack of tunes I’ve ever written.” I wholeheartedly agree. I love this recording. The band is on fire, and Chris’s playing has never been better.

“Raisin’ Cain” was produced by Kid Andersen (Rick Estrin & The Nightcats) at Andersen’s Greaseland Studio in San Jose, California. Joining Chris is this touring band: Steve Evans on bass, Greg Rahn on the keys, and sharing drums are Chris’s touring drummer Sky Garcia and D’Mar Martin. Chris pitches in on keyboards on some of the recordings.

Raisin’ Cain” begins by rocking out on “Hush Money”. This toe-tapper of a song sets the tone for the lyrical quality that permeates the recording. The second tune contains my favorite lyric on the recording “If you think I’m the problem…” and then resolves with the title “You Won’t Have A Problem When I’m Gone”. The band is cranked up quite a few notches on this one.

Anyone familiar with Chris and his music understands his love and reverence for the man he respectfully calls, Mr. B.B. King. “Too Many Problems” lyrically allows Chris to explode upon the landlord, and musically compares to the style of Chris’s mentor. Slowing down Chris spins a blues ballad about called “Down on the Ground”. Superb keyboards accompany a guitar solo by Chris that shows why Chris is a guitar player’s guitar player.

“Out of My Head” is far and away my favorite song on “Raisin’ Cain” Chris and the band perform at a level that brought favorable comparisons to Mr. B.B. King and his band. Chris’s solo is outstanding and the sound of the horns leads to a bigger band comparison. I could not get enough of this song and rank it among the best that Chris has ever recorded.

Chris shows off his lyrical creativity with the line “Laying around all-day, watching Dr. Phil, and drinking Tanqueray”; found within “I Believe I Got off Cheap”. This song relates the “benefits” of being kicked to the curb, in a relationship sense.

Concluding the recording is the sole instrumental, “Space Force”. This song will showcase the jazz elements in Chris’s music. It’s inventive and the most different song on this recording.

Click here to purchase your copy of “Raisin Cain”