My friend for the past 30 years passed away on April 29th 2022. Greg Poulos was one of the most outstanding guitar players that EVER hailed from the Suncoast – his home. I personally known Greg since the time I was in the Poulos Ramsey Band. I wrote this piece to help heal the tremendous loss we are all feeling as family, friends, fans and band mates and to document a small part of his long successful musical career. 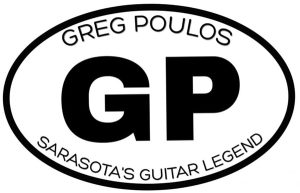 The Suncoast Blues Society asked me to permission to cross post this narrative from my website. Of course I accepted!

Its a story that needs to be shared since the SBS family has been fans of Greg for 25 years!!!

A shout out to Sarasota Guitar Legend – Greg Poulos.  Rest in Peace.

As I recollect, I met Greg Poulos in 1992. I was playing electric bass in Dan Electro (Mike Shannon) and the Silvertones. At that point I was an up-and-coming blues bass player, and I was fortunate enough to already have played with good bands. One man that was instrumental in my early career was Rock Bottom (David York), the harmonica extraordinaire. He scouted me out early on in the 1990’s. He had another band working with him at the time so I never really worked with him as a member of his band but he would recommend me to other musicians, the first being Clint “Deacon” Fuller. After spending some time with the Deacon Fuller Band, I was recruited by Dan Electro to join his band based upon Rock Bottom’s recommendation. Nineteen ninety two was a great year for me as that is when I met my girlfriend who is now my wife Carolyn Hamilton. 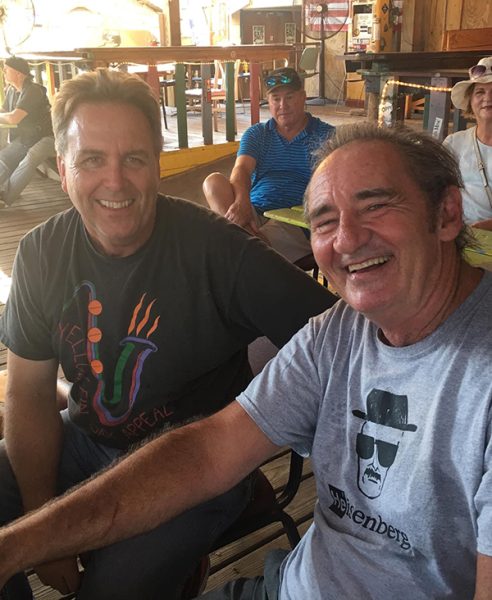 In the Silvertones, I got to play with a real good drummer named Dennis Laak, an excellent guitar player named Kirby Dietz, and Dan Electro on harmonica. That band played a little bit more funk and shook it up with other interesting tunes that I had not challenged before, and, hence, I was excited about being in the band. The Gator Club in Sarasota hired the band to be the house band. We were there 5 to 6 nights a week, Tuesday through Saturday, so literally it was a dream gig. We could leave our gear set up all week. I did not know Greg Poulos personally at this point; I only knew the name and knew that the man was an astounding guitar player.

Well, fast forward. Rock Bottom ended up having a heart attack and all the Tampa Bay blues community came together and had benefit concerts for him, one of which I performed at – the Gator Club in Sarasota, Florida.