Alastair Greene Band at Side Door

A large and enthusiastic crowd of rock-blues fans greeted Alastair Greene Band at Suncoast Blues Society’s show at The Side Door at The Palladium in St Petersburg.

Recently relocated from “SoCal” to Austin, TX, Alastair’s tour of the southeast came to St Pete to play at the always comfortable Side Door. The band consists of Alastair Greene on lead guitar, vocals, and song writing; Lonnie Trevino, Jr. on bass and backing vocals; and Luis Balderas on drums.

Playing from his collection of songs the show began with the instrumental Back at the Poor House from the recording 2020’s “The New World Blues”. This set the tone for what became a night heavy with rock blues and Alastair depth fretwork. Sprinkling the show with storytelling and jokes, Alastair described Living Today as a song written prior to the events of the past few years but one that none-the-less fit very well as a positive message on how to deal with  the struggles we all endured.

My favorite song from “The New World Blues” turned out to be Alastair’s as well. Bayou Mile allowed Alastair to describe some of the journey to Houma, Louisiana to make the recording at Tab Benoit’s Whiskey Bayou studio. Given the recent challenges with air travel I can’t help but think that Alastair in his songwriting has a knack for crafting songs that while event-based do not go stale.

Alastair’s witty humor shown through in the preamble to Down To Memphis. From the 2017 release “Dream Train”, Alastair discussed that he wrote the song while listening to a cab driver tell stories in Memphis. And suggested that after “8,000 or so” playing’s of the song from one of the digital streaming services that Alastair may earn enough to send the cabby, oh a $1.50!

Also, from “Dream Train” the band played Lucky 13 and Big Bad Wolf. All three of the songs, plus Lawdy Mama were highlights of this evening and appear on the live recording “Live From The 805”, a 2018 release of a live performance in Santa Barbara, California. For those who could not attend this show this live recording comes close to mirroring the energy in the room during the Side Door show. 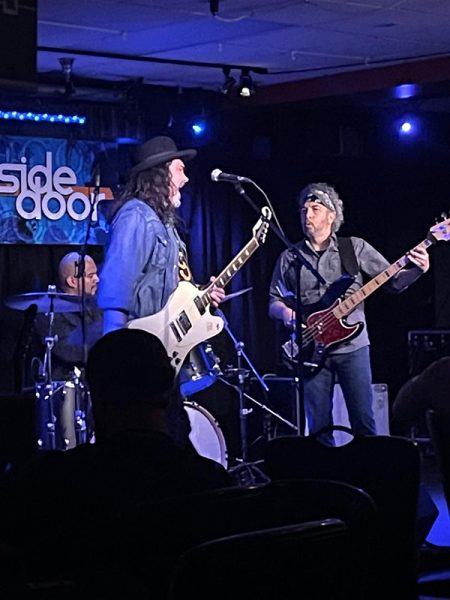 Alastair paid homage to Tab, Debbie Davis, and played a version of Peter Green’s Merry Go Round, a song that shows while Alastair can rock with the best of them, he also has deep blue’s chops. As he does so well, Alastair combined both genres and played Robert Johnson’s Stop Breaking Down Blues, in a style that was closer to The Rolling Stones “Exile on Main Street” version than Robert’s original.

Concluding the show, the band returned to the 2009 release “Walking In Circles” with their version of Cut You Loose. While this evening’s version was not as incendiary as the recording, this was an entertaining way for the band to conclude the formal show. This performance had the band building up the tempo, backing it off, and then taking the beat to an even higher level. The audience leapt to their feet for a standing ovation and hearing the requests for an encore the band returned with a blistering version of Johnny Winter’s Mean Town Blues.

For a review of The New World Blues

(Photos by the author)