What does a veteran touring musician do when their entire schedule gets wiped out in the blink of an eye? For Tinsley Ellis, who had spent four decades playing hundreds of shows every year, the respite gave him time to sequester in his basement studio, surrounded by his collection of guitars and associated equipment. And he made productive use of time, writing several hundred songs while digging deep into his record collection, listening to old favorites that quickly sparked a revitalized interest in music, especially the sounds that initially fired up his musical imagination.

Since his return to Alligator Records in 2018, the guitarist has released two top-notch albums, Winning Hand and Ice Cream In Hell. He somehow managed to whittle through his prolific songwriting output to select the ten songs featured on his new release. Once again, the focus is centered on his outstanding guitar work along with his weathered vocals. The songs address familiar themes like love gone bad, heartache, and regret gained in hindsight, often wrapped up in sounds that take listeners back to the glory days of the southern-rock sound.

The opener, “One Less Reason,” has a twin guitar attack, Ellis doing double duty on slide and standard guitar that readily conjures up comparisons to the Allman Brothers Band. His closing guitar solo is an immediate highlight. “Right Down The Drain” offers more of a good thing, culminating in a lengthy Allman-esque six string interplay featuring slide guitar. “Juju” sounds like a long-lost Allman Brothers classic, with plenty of slide guitar and Kevin McKendree‘s always impressive contributions on piano. The ballad “Just Like Rain” is a touching song on the redemptive power of love, featuring Jim Hoke on saxophone and Andrew Carney on trumpet, one of three songs the duo appears on. 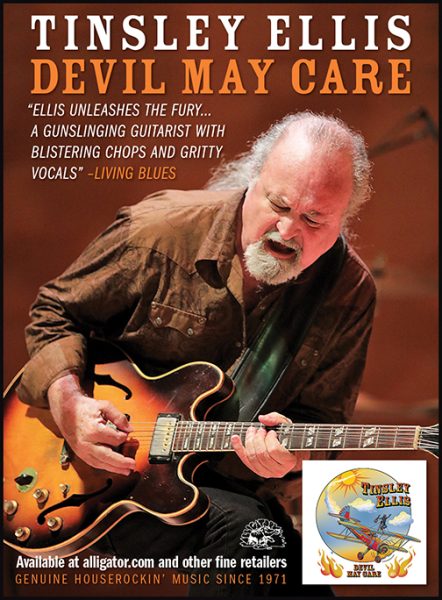 Ellis has always shined on the slow blues numbers, and “Don’t Bury Our Love” adds another gripping performance to that list, taut guitar licks echoing his pleading heart-wrenching vocal. Things definitely haven’t improved on “Slow Train To Hell,” which finds Ellis deep in the throes of despair, tired of waiting for the return of his long-gone lover. His searing performance will undoubtedly leave a lasting impression on anyone who hears it. “One Last Ride” is the album’s longest cut, with Ellis in an introspective mood, his guitar providing a steady stream of forthright testimony.

“Beat the Devil” has a compelling arrangement with McKendree fleshing out the sound with thick chords on the organ while the horns supply plenty of sharp accents behind the leader’s rousing vocal. The rhythm section of Steve Mackey on bass and Lynn Williams on drums lay down some funkier grooves on the driving “Step Up,” then Ellis breaks out his wah-wah pedal, injecting “28 Days” with a full tilt, ferocious guitar attack from start to finish.

Over the years, Tinsley Ellis has stuck with the same approach. Give listeners a batch of rousing original songs, delivered with raw, robust vocals, and plenty of dynamic fretwork. He has the chops to keep the winning formula rolling along, a point made abundantly clear throughout this fine new release.

(Mark Thompson is a past president of Suncoast Blues Society, and is a frequent contributor to Blues Blast Magazine)

CDs, including autographed copies are available at Alligator Records