What a weekend – don’t know about you but I need a week to recuperate from the Tampa Bay Blues Fest! So much great music and what a turnout – folks were obviously hungry for live music, and they were well fed!

Your Suncoast Blues Society was there of course, and we want to thank all our loyal Blues lovers and supporters who bought merchandise and memberships (almost seventy!!) – we had a blast talking with everyone that stopped by.

We could not have done it without our wonderful volunteers that helped us: Beverly Moribito,  Julie Deschaine, Mark Thompson, Warren McDougle, Mike Hennesey, Vinny Marini, John Herzog, and Liz & Doc Pennock – you were amazing!

Also want to thank Chuck Ross for supporting Youth Sunday again this year – about twelve young people and their chaperones had the opportunity to hear live Blues for the first time. This is a collaboration we do with Chuck every year as part of our mission to share Blues music with future generations.

So, let’s keep the music coming! YOUR Suncoast Blues Society has been busy working with venues to book shows for you. Here is a list of our upcoming events – mark your calendars: 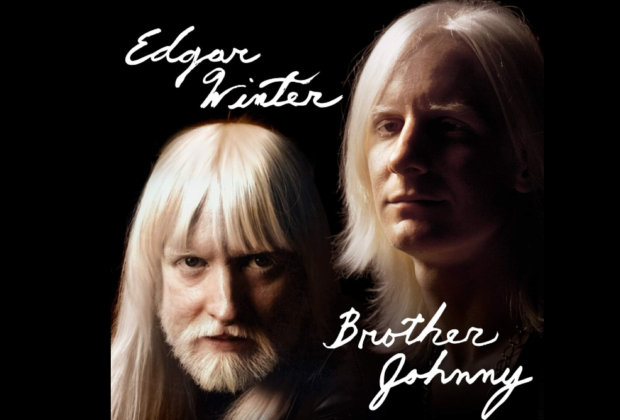 Oh, have I been waiting for this one! And it was well-worth the wait.

When writing this review, I found it hard to separate the music of John Dawson Winter III from my life. Understandably so because Johnny Winter shaped much of my musical interests. It’s no stretch to say I would not be writing this review or even a member of Suncoast Blues Society without the influences of Johnny. So, when I saw the press release for the musicians coming together with Edgar Winter to record a tribute to his brother, I could not wait!

Right from the downbeat of this 17-song recording, Joe Bonamassa explodes with a wonderful rendition of Mean Town Blues. Playing in front of Edgar’s vocals Joe is faithful to Johnny’s original. A song these ears first heard on what I consider to be the best live recording in blues rock history, “Johnny Winter And Live.” On “Still Alive and Well” Kenny Wayne Shepherd plays virtually note for note the song Johnny issued on the 1973 album of the same name, shortly after recovering from his well-documented heroin addiction.

Keb’ Mo’ and Edgar paired well on Lone Star Blues and provide a moment to reflect on what a great slide guitar player Johnny was. A point reinforced when Billy Gibbons and today’s premier slide player Derek Trucks turn the heat up on, I’m Yours, I’m Hers. The original was Johnny at his raucous psychedelic best. Hearing this version my mind recalled blowing out speakers in my bedroom on this song.

I am so happy that Stranger made the recording. This has forever been my favorite slow and poignant song from Johnny. In high school I submitted these lyrics as an example of poetry. The teacher was not amused, as my grade attested to. Proving forever to me that poetry is however one defines it. As one who stays away from recordings featuring Michael McDonald, I must complement his vocals on this version. The pairing of Michael with Joe Walsh and Ringo Star is genius.

Both Johnny B. Goode and Highway 61 Revisited are my least favorite songs on this recording. Phil X performed the former in the style of The Rolling Stones, and the latter with “KWS” truer to Dylan’s original. Understandable as recreating the blistering incendiary version of “Highway” that Johnny recorded on “Captured Live” is beyond the capabilities of mere mortals.

Steve Lukather pitches in for a version of Rock ‘n’ Roll Hoochie Koo that brings the mind back to the days when Johnny and Rick Derringer were, in my opinion, the best blues rock guitar duo in existence. Great backing vocals accompany Edgar’s vocals on this one. Doyle Bramall II  performs When You Got A Good Friend in honor of Johnny’s 1969 self-titled recording. Traditional blues, and it’s something that Johnny returned to later in his career. More on this topic shortly.

The familiar licks to Guess I’ll Go Away explode off the guitar of Doug Rappaport and include marvelous vocals by the Foo Fighter’s late Taylor Hawkins. This version sounded as fresh as when first released on Johnny Winter And (studio version). 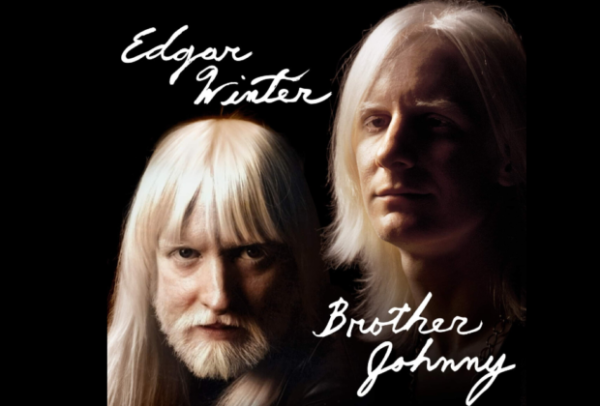 Edgar takes center stage singing a version of Drown In My Own Tears done in the style of the Charles’s – Ray and Ezra. Another example of the deep blues that Johnny is normally not associated with, but a song that he faithfully recorded on his self-titled album.

Joe Bonamassa returns with a true rendition of Self-Destructive Blues, a song Johnny artfully recorded on ”Scorchin’ Blues.” This song may have my all-time favorite Johnny guitar lick, and I suspect that Johnny is smiling over this version. Well done, Joe, especially recreating the lick that Johnny included in many of his song. “When I get through boogyin,’ they’ll be no more blues around.” Indeed.

Earlier I mentioned that Johnny paid homage to the blues masters. Winning three Grammy Awards for production work with Muddy Waters cemented his legacy with traditional blues. It was through Johnny that I received introductions to both Muddy and James Cotton. Back to the recording, Got My Mojo Working features Bobby Rush, and is evocative of “Muddy ‘Mississippi’ Waters – Live.” I closed my eyes and felt Muddy and James on this one.

Thank you, Quarto Valley Records, and Edgar Winter, for bringing this recording to life. I won’t be drowning in my own tears, but this recording brought a tear to my eyes, a happy one. Most excellent. Heartily recommended for fans of Johnny. And if you are unfamiliar with Johnny’s work this is a great jump-of point to embark on a marvelous journey of some of the best blues-rock licks every recorded. 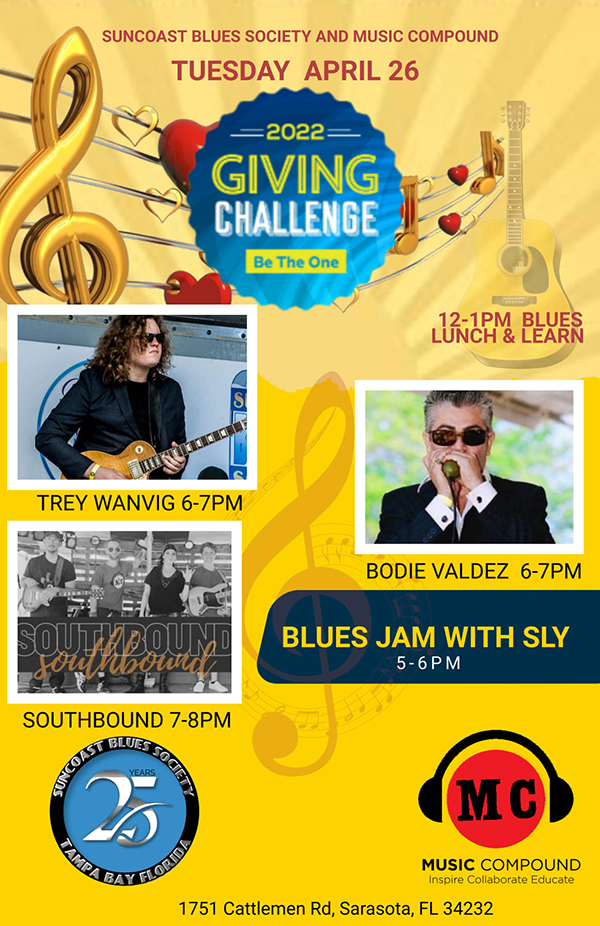 Special Events for a Special Occasion

From April 26th 12:00pm until April 27th 12:00pm, you will be able to make a huge difference supporting blues. The Giving Challenge 2022 is back! And your society has some special events planned for this edition of the challenge.

April 26th will have two free events for your enjoyment. Starting at 12:00pm – the kickoff time – Suncoast Blues Society and Music Compound on Cattleman Road will kick off a day of activity.

At 12:00 the staff at Music Compound will host a blues “lunch and learn” session. Activities planned include a blues-based fingerstyle guitar lesson. 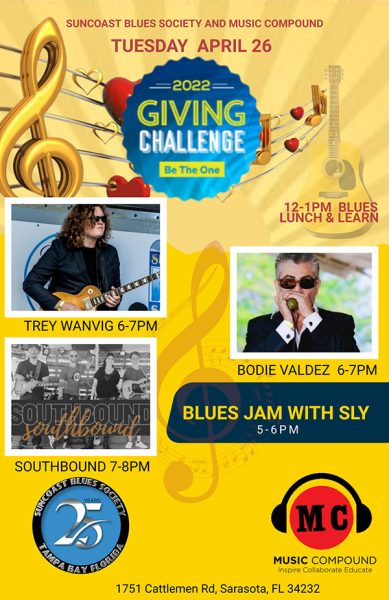 The music will heat up beginning at 5pm, and the schedule follows:

For members north of the Skyway Bridge, Suncoast Blues Society is happy to present Brian Leneschmidt and Sarasota Slim at Bayboro Brewery in St. Pete!

Wherever your ability to donate rests, this 24-hour online giving day is a chance to spread many positive vibes displaying your generosity and help grow blues in our community. As in past years there will be targeted donations available for you to direct your generosity towards a goal. Last challenge your donations funded a workshop where Suncoast Blues Society provided cigar box guitar kits to young aspiring guitar players! We hope to do something similar this year.

The Patterson Foundation is turning every ($25 to $100 per person) donation an individual makes to Suncoast Blues Society on www.GivingPartnerChallenge.org into twice the gift amount so this is the perfect time to “give”. 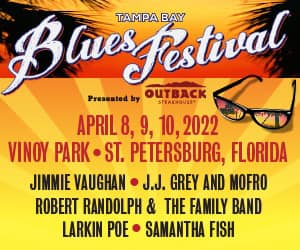 Tampa Bay Blues Fest is coming soon, and Suncoast Blues Society (SBS) will be back in their usual place next to the artist’s tent.

And what a great lineup – you are not going to want to miss this!

If you are a current member of SBS, you are eligible to receive a $10 discount on your ticket(s) so the cost for members will be:

You will receive a confirmation and your name will be placed on the “will-call” list at the gate.

If you are not a current member, you can sign up today to take advantage of this offer. https://suncoastblues.org/product/sbs-membership/

If you have any questions, contact Jesse at membership@suncoastblues.org 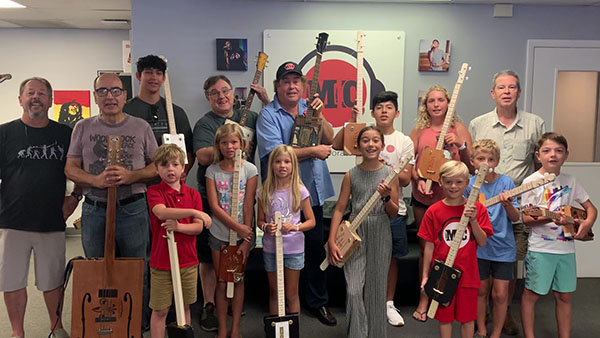 10 young members of our community received free guitar kits which they put together and took home as theirs to keep.

During the last Giving Challenge donors to Suncoast Blues Society had the option to direct their funding for specific purposes. One was to purchase cigar box guitar kits and provide them along with  instruction to youth in the community. With the generosity of our donors Suncoast Blues Society worked with CB Gitty, who provided pricing that allowed SBS to include additional students in the workshop. 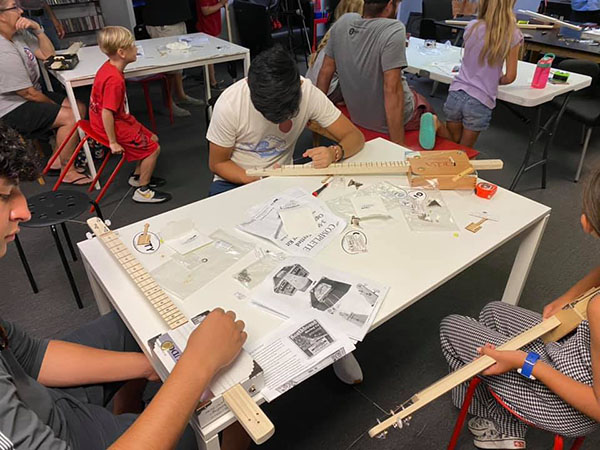 Judging by the smiles on the faces of the youth and the parents and volunteers in attendance, the event was a success. Each student completed their guitar and after fine tuning by instructor Steve Arvey, joined in on a guitar and drum jam that was led by local bassist Joe Bruno, who brought and demonstrated his custom-built cigar box bass guitar. 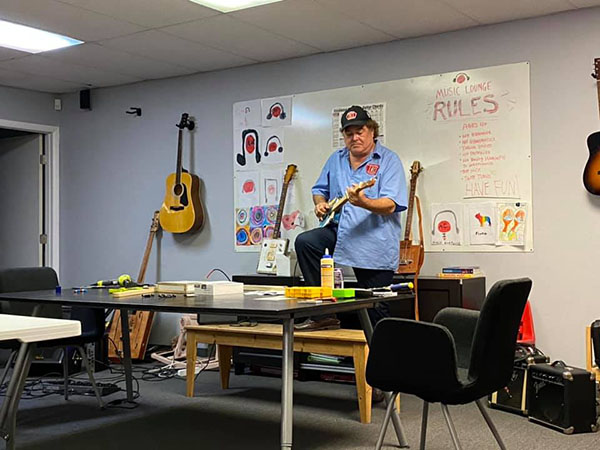 Suncoast Blues society extends thanks to Jenny Townsend, founder of Music Compound. Jenny generously provided the space to host the workshop and without her this event might not have been possible. Assisting Steve at the workshop were Bill Hubbard – whose long hours of prepping the kits for Saturday will forever be remembered and appreciated; Edward Eannarino staffed one of the tables and brought completed cigar box guitars for the youth to play. Coordinating and assisting from Suncoast Blues Society was Scott Morris.

Thanks again to the donors that made this possible. As Music Compound is fond of saying – you rock! 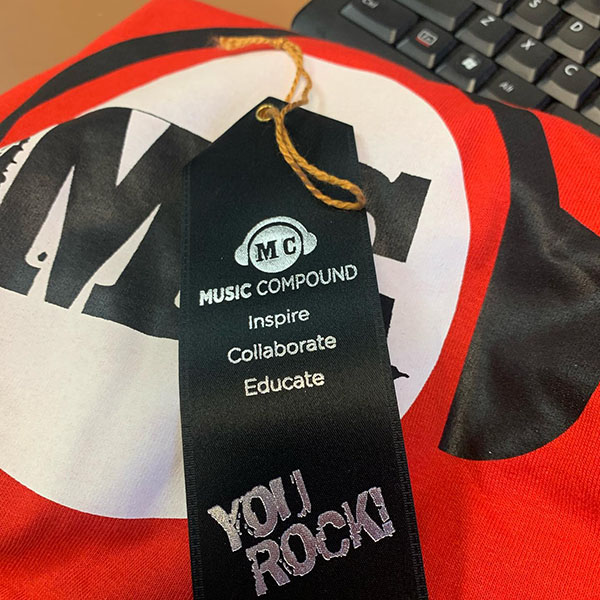 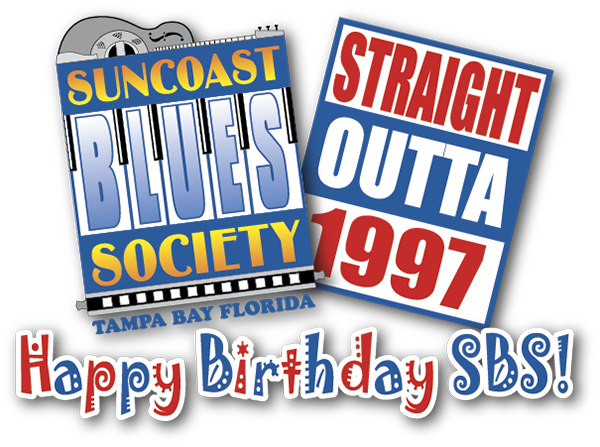 Well folks it all started 24 years ago when Ken Torvik from Minneapolis and Larry Lisk of Detroit decided to put something together in the Tampa Bay area so they could hear their favorite music and see their favorite musicians without having to drive all over Florida resulting in the birth of the Suncoast Blues Society (SBS)!! 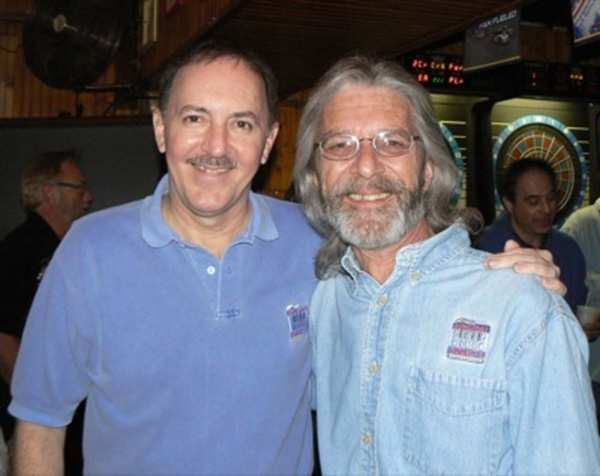 Usually, SBS puts on a special Anniversary Show for our members to celebrate. However, as we all know, COVID wreaked havoc on our lives and our community which has greatly impacted musicians, local businesses, and venues.

However, there is light at the end of the tunnel and it is growing brighter every day so it is time to get back out there and enjoy our Blues music and start dancing again. This did not happen in time for SBS to plan an Anniversary Party for this year but we have been able to pull together some smaller events.

The first one, coming up next month, will be at Gill Dawg in Port Richey. If you have not been there yet you are missing out – great outdoor venue with a covered area and plenty of room for dancing. They are also pet friendly!
So come on out on the 4th and help us celebrate our 24th with the Tom Craig Band. 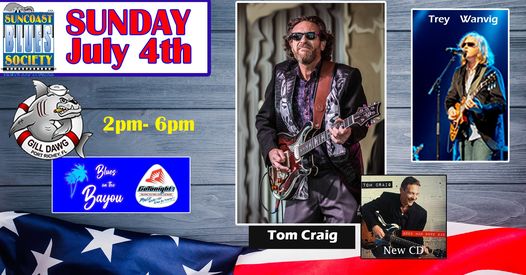 We will commemorate Suncoast Blues Society’s 24th Anniversary with gifts and prizes. There will be drawings throughout the day for great SBS merchandise.

Show us your membership card and you will receive a gift. If you’re not a member, this will be a perfect opportunity to sign-up.

Already a member, go ahead and renew! Either way, you will receive 2 CDs plus a gift.

Stay tuned – we will be sending out additional information in our weekly Suncoast Blues News.