Tampa-based musician Alex Lopez brought his powerful band, The Xpress, to the Browne’s Lab Theatre at Florida Studio Theatre (FST) for a party to celebrate the release of Nasty Crime. And what a party it was as Alex and the band treated the large turnout to a non-stop energetic set of music that left the crowd standing in applause.

Taking the stage in the intimate, and quite lovely, room at FST, Alex and the band played primarily from the new release. “No Way” set the tone and got the band engaged early, as Alex wove crafty lyrics and licks around the up-tempo beat of this song. Flowing seamlessly from song to song “Just Wait” turned up the heat and highlighted the understated licks that he delivers.
Alex paused to introduce the concept behind his music writing philosophy and that properly set the scene for the title track, “Nasty Crime.” The Xpress (Kana Leimbach on drums, Steve Roberts on bass, Kenny Hoye on keys) kept up a driving beat, with Kenny tossing in some nice keyboard runs to counterpoint Alex and his guitar. 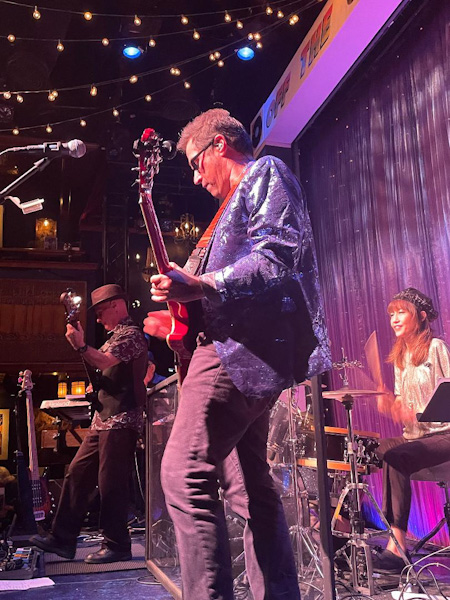 The slower bluesy “When The Sun Goes Down” followed. This song contains poignant lyrics that Alex crafted after reflection on life’s twists and turns. “Holy Woman” has a funky blues feel and is Alex’s tribute to the positive impact women make in the world. Scalding guitar licks accompanied this song.
Kana Leimbach drumming kicked off the next song, the current recording’s rocking first cut “World On Fire.” Alex showed his slide guitar skills, weaving slide rhythm with lead licks.
Concluding the formal sequence of Nasty Crimes songs, Alex played the recording’s final song, “That’s Alright.” Kenny on keys, and Alex, traded off during the lovely melody. Alex’s measured guitar response and solo gave this performance immense charm and kept me quite entertained, enough to call this my favorite moment of the evening. 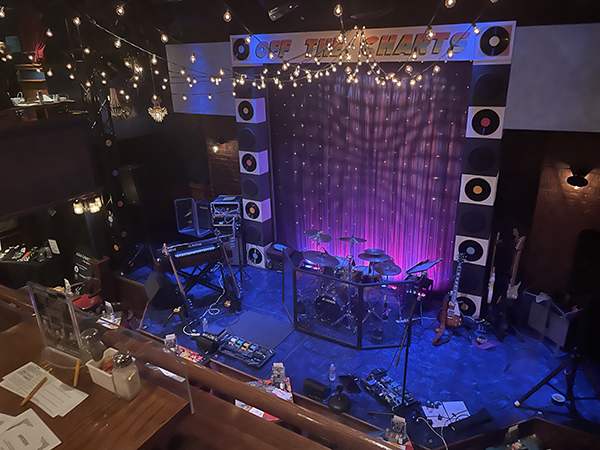 Transitioning away from the current release, Alex performed the title to 2017’s Slowdown. Playing from 2021’s Rising Up, the band performed the title track, and “Paradise”. Yours Truly, Me (2019) contributed the bluest song of this evening, “Take Me Back Home”. A lovely song with an equally compelling slide guitar. Most enjoyable. On this evening, the same recording contributed “Tush,” a funky version of the ZZ Top classic.
Returning to Slowdown, the blues punctuated “Stolen,” and was followed by “Dangerous.” That wrapped the formal performance, and after a break of few seconds the encore kicked of with “Light It Up,” and the show concluded with “Even Up The Score.” One hour, forty-five minutes of non-stop fun!
– Scott Morris, Treasurer, Suncoast Blues Society
(Photos by author)