The New World Blues is Alastair Greene’s newest recording, the first for Tab Benoit’s Whiskey Bayou Records.  Written mostly by Alastair, with an assist or two from Tab, this blues-rock effort features Alastair’s guitar talents in front of Tab on drums (yes, drums!) and Tab’s bassist Corey Duplechin. On the recording this “New World Blues” blues-rock power trio is a force to be reckoned with.

Many here on the Suncoast might not be familiar with Alastair. As a long-time attendee of The Big Blues Bender, I became a fan of Alastair’s talents from his late-night jamming as a member of The Bender Brass. And many “Benderheads” have enjoyed it when Alastair brings his California-based band to perform at “The Bender”. Alastair built his chops as a touring sideman for The Alan Parsons Project, Mickey Thomas’ Starship, and more recently with Sugar Ray Rayford. 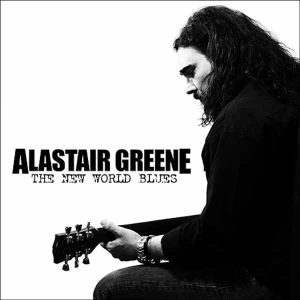 The trio wastes no time cranking it up with Living Today. Capturing the craziness of 2020 Alastair’s lyrics quickly encapsulates the feeling many have and challenges the listener to “let your love shine through” – all behind a driving beat laid down by Tab and Corey.

Bayou Mile became a favorite. Personally, the words are a reminder of countless hours spent waiting for a flight, barely able to suppress the desire to quickly be anywhere but the airport. The words hooked me; Alastair’s playing had me replaying the song again and again.

The instrumental Back at the Poor House showcases Alastair’s guitar playing, and had me tapping my foot, while reaching to raise the volume. Twice.

Heroes, co-written with Tab, is arguably the least “blues” song on the recording. More of a rock ballad than blues, Heroes is none-the-less enjoyable.

Returning to the blues-rock feel Alone and Confused start with a slow blues beat and builds into an extended guitar solo for Alastair. If you like your solos with some edge to it this one is for you.

Wrapping up the recording with the title track The New World Blues Alastair returns to the slide, with the driving beat supplied by Tab and Corey. For me the song is reminiscent of and perhaps the equal to my favorite Johnny Winter slide efforts.

All and all, a wonderful effort by Alastair.  Most enjoyable.

A taste of Back at the Poor House