“You Ain’t Unlucky” An interview with Veronica Lewis

“You Ain’t Unlucky” An interview with Veronica Lewis

An interview with Veronica Lewis

by Monte Adkison, the “Blues Stalker”

As the title tracks lyrics suggest, a positive spin can be embraced by anything that life throws at you. That is certainly evident in the recent success of 17-year-old pianist/songwriter Veronica Lewis with her debut release. In the midst of the lockdowns and restrictions of a global pandemic that has halted or derailed many musician’s careers, her climb in the blues/root’s music charts brings a welcome ray of sunshine and hope for the future.

Her past awards include Blues Artist of the Year 2020 by the Boston Music Awards, Best Young Artist by the New England Hall of Fame 2020, and winner of the 2020 Boston Blues Challenge. Veronica’s talent and passion for vintage boogie-woogie piano is being delivered by her trio of piano, drums, and saxophone. After the recent success of her first release, get ready to hear more from this young talent as she tours to expand her fan base. Be sure to bring your dancing shoes! 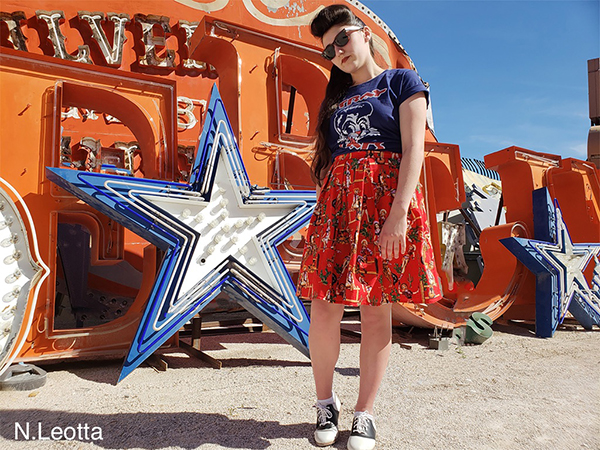 BS: Veronica, can you tell us how and when your attraction to the piano began?

VL: “It started from hearing early recordings of Katie Webster, Jerry Lee Lewis, Henry Gray, and others. Even when I was 5 or 6 years old, I loved listening to every genre of music. But I was immediately drawn to blues, boogie-woogie, New Orleans piano, and roots rock and roll.  It is such fun music to listen to, and I wanted to try and play it myself.

When I started playing piano at six years old, I learned some bass lines and the 1,4,5 progression, and I was totally hooked. I’m self-taught and learned by listening and improvising. I didn’t learn to play using sheet music, just by ear. When I was 12, I did get some sight-reading lessons for a few months, which was pretty cool. But I can see how learning the traditional way can really slow you down from discovering the joy of improvisation. That is why the Blues tradition and progression are so important to me. It may have a defined structure, but focusing on writing songs in the 12-bar blues, allowed me to be more confident and free in my playing.”

BS: Tell us specifically about “Margaret.”

VL: “Margaret is the first and only piano I have ever had. When I was six, we rescued a 115-year-old piano from a neighbor’s barn. The name “Margaret” was engraved on the front of the piano, and even though we don’t know who ‘Margaret’ is, the name stuck. I learned to play on Margaret, and most of my songs are written on her. In fact, on my brand-new album, “You Ain’t Unlucky,” two tracks were recorded on Margaret. My sound engineer, Ben Rogers, came to my house, and we recorded a few songs on the piano, and it is so special to have that as a part of my debut album.”

BS: Your name is often mentioned in reviews to the style of Marcia Ball, Katie Webster, Jerry Lee Lewis, and Victor Wainwright. Have you delved into the works of Pete Johnson, Meade Lux Lewis, and Albert Ammons?

VL: “Absolutely! I love Pete Johnson, Meade Lux Lewis, and Albert Ammons. I really love to listen and appreciate the different baselines that the great blues piano players use. I also really respect their distinct melodic riffs they create in the right hand.”

BS: What is it about boogie-woogie that appeals to you?

VL: “When I first started playing boogie-woogie, I was around six years old. The first thing that drew me towards this music was how upbeat and exciting it was to hear. As I started teaching myself to play, it became even more fun to write my own blues, boogie-woogie songs. So, initially, I was drawn to the energy and feel of the music, and as I have progressed as an artist (and brought who I am into the style), I have been able to grow with it.” 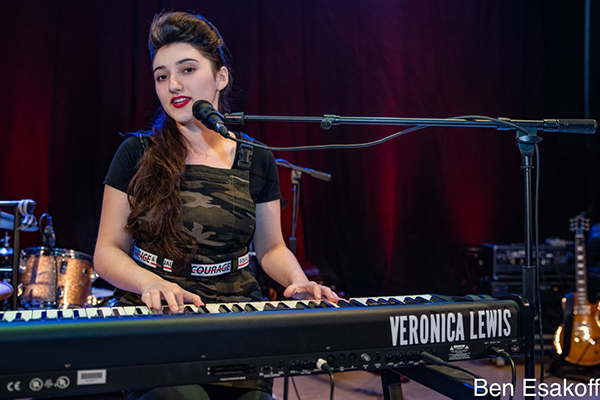 BS: Have you ever participated in any of the Pinetop Perkins Foundation’s piano workshops or master classes in Clarksdale?

VL: “Yes! When I was 12 years old, I was awarded the David Maxwell scholarship, and I got the chance to go to Hopson’s Plantation in Clarksdale and be a part of a piano workshop for a few days. In fact, at the end of the week, my classmates and I got the chance to perform at Morgan Freeman’s blues club, Ground Zero. That trip, and being able to play with all the incredible musicians, helped inspire a few of the tracks on the album.”

BS: Your debut release “You Ain’t Unlucky” is self-produced. What were the biggest challenges that you faced in this effort?

VL: “I think the biggest challenge in self-producing this album was deciding when the songs were ready to be released. As an artist, it’s easy to be your own biggest critic, and deciding when the songs were done was definitely a challenge. I had a very clear vision for what I wanted each song to sound like and how the arrangements should be laid down. But knowing when the songs were complete, and then releasing them, was an important part of growing as a recording artist.  I think of this album as a stakeholder in the ground for this early part of my musical journey. I am really proud of the music we were able to create, and I’m just so excited that everyone gets to hear this new music.”

BS: Social media has even become more important to musicians during the current pandemic. How do you use it? Do you think the quality of some of the live streaming attempts has helped or hurt the industry?

VL: “The only way to stay connected during this time is through technology and social media. Facebook, Instagram, Twitter, and YouTube have been a few platforms that I use frequently. I use these platforms to share music and post virtual performances. Without live shows, I knew I had to be able to create Live Stream performances to share with everyone virtually. It was a big undertaking when I was learning how to record the video and audio of my band performing (in our rehearsal space). However, I am very grateful to have learned these new skills, and I am even more grateful for all the support I have received even in this crazy year. That is what keeps me motivated, and I know I will continue to keep pushing forward.” 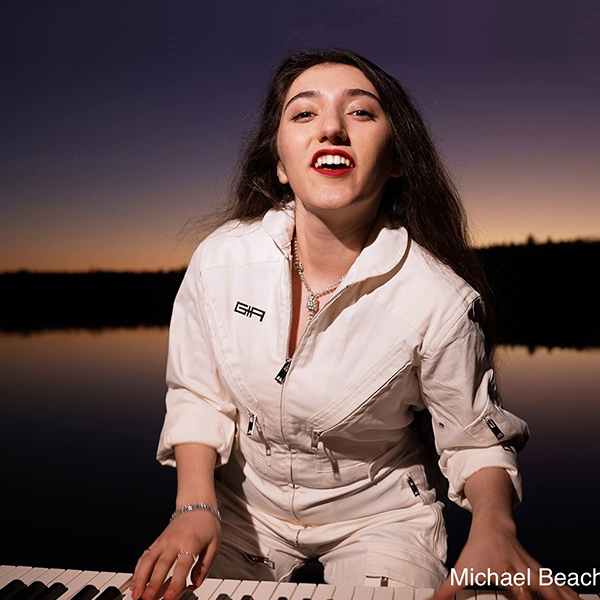 BS: You are currently a graduating senior with a chart busting debut release. What are your plans for the upcoming year assuming that things begin to improve for travel and work?

VL: “I plan to keep creating music, recording, and to be ready to play live music again in the near future. Of course, safety is the top priority, and I am waiting until it’s safe for everyone in the audience, and my band, to hit the road. I hope we can start playing live shows soon, but in the meantime, I will continue to stay connected with everyone online with virtual performances and releases.  As far as touring goes, I’m very excited and honored to announce I will be working with Rick Booth and his team at Intrepid Artists International for booking.”

BS: What kind of music is in your current playlist? Who are you listening to?

VL: “I listen to so many different genres of music, and it varies between older artists and more contemporary musicians. Right now, I’ve been listening to a lot of Ray Charles, Katie Webster, Doctor John, Little Richard, and all of the classic roots and blues players. But I still love and appreciate modern artists and listen to artists like Freddie Mercury and Avril Lavigne too.”

BS: Many vocalists trace their training to church choirs and gospel groups. When did you discover your talent for vocals and how did you develop such a voice with such confidence?

VL: “I started singing when I was 12, and honestly, at first, I didn’t know how to sing correctly.  However, about a year ago, I started working with a classically trained opera singer. I began to understand the proper techniques, and I was able to unlock my voice. Also, I learned about the physiological aspect of singing, and this connected my head to my voice. That was an enormous breakthrough and one of the most important parts of gaining confidence as a singer.”

BS: Introduce us to your band and how it came about.

VL: “On the album, you will hear the trio sound: piano, drums, and saxophone. Mike Walsh, Chris Anzalone, and Ben Rogers are the drummers on the album. And Don Davis and Joel Edinberg are the saxophone players. Mike Walsh and Don Davis have been the main players in my trio since 2019. They were my first band. We met in June 2019 and played our first show together in August 2019, so this is still pretty new. But fate was on our side and brought us together for sure on this project.  Working with such talented Drummers and Saxophonists created a tight, full sound that helped bring my songs to another level. It was a real honor to work with all the musicians on the album.”

BS: How does your songwriting happen? Do you have scraps of paper with potential lyrics tucked all over the place as ideas pop into your head?

VL: “Every song starts with a visual image or a story in my mind. Usually, I will write the lyrics first for the song and then decide how I want the music to sound. Understanding what I want the song to be about allows me to determine how I want the piano and music to represent that message. And, I can definitely have scraps of paper with potential song ideas all over the place or recorded on my phone if I am away from a keyboard.”

Best of luck, Veronica. I know you are eager to tour to promote your music and I know fans are eager to see you perform live. Here’s to a successful year!