“’Good Man Gone Bad’ is just out and about to make a big splash in the blues world.” – Tas Cru

Produced by harmonica ace Mikey Junior and mixed at Fat Rabbit Studios by Dave Gross, this set of tunes follows Tom’s first recording with Soul Patch. “Get Ready for Me “. Comparatively speaking “Good Man” documents Tom’s growth as a musician all while presenting an enjoyable collection of 13 songs that cover most blues styles. But it’s Tom’s writing, and co-writing with Mikey Junior, along with the soulful delivery that rang true for me.

Beginning with the first cut “I’m Working Too Hard” Tom sets a lyrical theme for the recording that hops from one side of a relationship to another. Accompanied by a driving beat Tom professes to be “I’m working too hard for your love”. Many probably have felt similar, but wisely, for the health of their specific relationship kept their own council. Tom’s words might have you saying to yourself “I feel you brother”!

I really enjoy the next track “What A Man’s Gotta Do”. The guitar work accentuates the beat and the harmonica by Mikey Junior lends a nice touch throughout the song, specifically as the song fades out. Performed live this song has people up and dancing.

The title track (You Made A) “Good Man Gone Bad” appears third on the recording and Tom’s soulful voice resonates in this song. This bluesy ballad bespeaks of making “the worst of a good situation”, leading the listener to speculate on the destructive nature of succumbing to temptation. Tom’s vocals are spot on and clearly Tom is at home base with these types of blues ballads.

Harmonica sets the tone on another ballad “It’s All My Fault”, another one of Tom’s fine ballads. The band lends just the right touch with a beat that fits the lyrics. Tom’s guitar solo is perfectly measured. 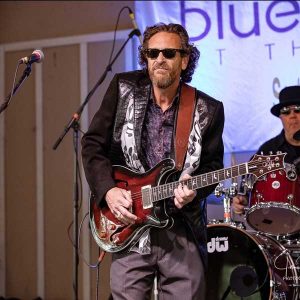 “Sheepdog”. Well truth be told on first listen I was not quite sure how I felt. But on repeated listens; yes, Tom has crafted a winner! This rocking blues song is a fan favorite during performance, especially memorable was the version performed during Blues Bash at the Ranch with Gabe Stillman lending a hand on slide guitar. This song grew on me. On a recording where my ear preferred the soulful ballads, this is more than an add-in change of pace. “Sheepdog” is a fine song and deserves presence within Tom’s performance set list.

Slowing down, Tom showcases his vocals on “When You Love A Bluesman”.  Perhaps this is when Tom is at his best. His soulful blues vocals and smart lyrics fronting a tight band, and in this song the harmonica rings true. Tom chips in with tasty blues licks on his guitar. The groove captured me right away. Most enjoyable.

“Treat Your Daddy Nice” has a familiar blues beat, and the lyrics make this song work. Once again, this hard-working bluesman asks “baby” to “treat daddy nice” because after all,” I’m the one that makes you feel all right”.

“My Turn to Cry” finishes off the recording with a soulful, saxophone backed ballad. Once again demonstrating that Tom knows how to deliver a song that places “Soul in My Blues”.  Close your eyes and picture slow dances late at night. The symmetry on the recording of the hard-working hero from the first song now practicing patience on the last song is a subtlety that I enjoyed. And the delivery lets the listener speculate on the cause of the tears.

On a personal note, it’s been a pleasure to see Tom perform and grow musically over these past few months. Wintering in Florida Tom put together a tight band that delivered an enjoyable show experience. Secondly, Tom switched roles from front man to sideman while touring with Tas Cru, sometimes on the same day. Tom is putting in the work, to fine success. This is an up-and-coming bluesman to keep an eye on.

Tom has a clear vision of what he wants to achieve as a musician. I intend to “keep my eyes wide open” to see where Tom’s musical journey takes him; I suspect that after a few listens to “Good Man Gone Bad” you will choose to do the same.

“Good Man Gone Bad” is due to be released on April 20, 2021. The recording is presently available for pre-order. For more information visit Tom Craig Band’s website.