“They Call Me Mud”

“They Call Me Mud”

by Monte Adkison aka “The Blues Stalker”

Some people are just born to sing the blues. Larry “Mud” Morganfield, the eldest son of legendary bluesman Muddy Waters certainly fits in that category. Although his parents divorced when he was young and his father had a hectic touring schedule, his dad’s talent and love of the blues was shared later in his life. He began playing drums that his father bought him every Christmas beginning at the age of seven. He is also skilled on bass guitar but his songwriting and vocals showcase his true legacy. 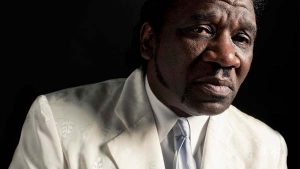 Mud began his professional music journey at age 50 after a career  as a truck driver and his father’s death in 1983. Beginning with club appearances in the Chicago area, it was his performance at the 2007 Chicago Blues Festival that launched his career to an expanded fan base. An indie release in 2008 “Mud Morganfield with the Dirty Aces Live” was followed by 2012 Severn Records “Son of the Seventh Son” produced by harmonica ace Bob Corritore. In 2014, “For Pops:  A Tribute to Muddy Waters” with the Fabulous Thunderbird’s Kim Wilson, won Best Traditional Blues Album in 2015 at the Blues Music Awards. His most recent release “They Call Me Mud” has 10/12 songs penned by Morganfield and a distinct soul feel with a substantial horn section. Mud has steadily developed his own style and groove.

Mud has the reputation of being one of the best dressed players on stage. Like the late Junior Wells and the old school Chicago bluesmen, he shows up in classy suits that show the audience that they are in for a special performance. No overalls or ripped Levi’s for this stage act. It is show time!

This time a year ago Mud was touring in India. Like all musicians today, their careers have been stonewalled by a cruel pandemic that has affected the entire music industry globally. Mud comes to Florida after months of isolation to play the Bradenton Blues Festival His concern for his ninety year old mother who lives with him is foremost. With the pandemic still raging we are indeed fortunate to have the opportunity to see Morganfield perform  from a safe social distance at an outdoor venue. As Mud’s friend, Jeff Malone, president of the Northeast Florida Blues Society and who also booked him for the Amelia Island Blues Festival (2010-2016) recently told me:  “His father Muddy Waters was the pioneer of that electric blues sound migrating up from the Delta and that same spirit is in the DNA of his oldest son, Mud Morganfield. You are in for a special treat. Close your eyes and just imagine the glory days of the Chicago Chess sound.”