The energy at the end of disk one continues with the first recording of this 21-track disk. The late Michael Burks and “Love Disease” is followed by the marvelous Kenny Neal with “I’m a Blues Man”.  Arguably underrated, The Holmes Brothers please with their foot tapping beat and creative lyrics on “Run Myself Out of Town”. A classic from a classic blues band that will probably have you singing along.

“Jump Start” reminds us how wonderful a guitar player “Little Charlie” Baty was, performing here with The Nightcats. And an Alligator recording would not be complete without Katie Webster, featured on “I’m Still Leaving You”. A duo whose career ended much too early, Smokin’ Joe Kubek and Bnois King, rock and slide their way through “Don’t Lose My Number” 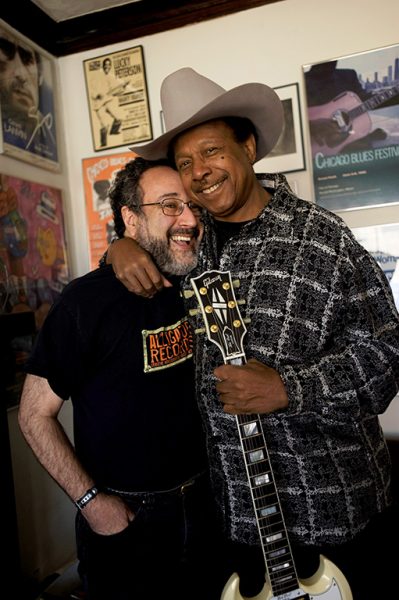 Downshifting a bit, Carey Bell brings some old-time, smokey-bar Chicago blues with “I Got a Rich Man’s Woman”, the one that is “living on a poor man’s pay”.  C. J. Chenier turns up the heat, and probably your volume, with Zydeco in “Au Contraire, Mon Frere”. Mavis Staples impresses with “There’s A Devil On The Loose”.

“That’s Not What You Said Last Night” has Bob Margolin rocking out; old-time blues returns with Billy Boy Arnold and “Man of Considerable Taste”. Piedmont blues appears with Cephas & Wiggins who “Ain’t Seen My Baby”. Nice harmonica work on this one, and they are followed with a slow blues number from Long John Hunter called “Marfa Lights”, one that had me picturing couples dancing, closely.

Joe Louis Walker has a different opinion, and searing guitar work, with “I Won’t Do That”. Janiva Magness funks it up with “That’s What Love Will Make You Do”, leaving the listener to consider if love will make Joe Louis do what he sang he would not do.

The second volume wraps up with a country blues song “Going Back To Alabama” by The Siegel-Schwall Band, and a gospel number from Corey Harris & Henry Butler called “Why Don’t You Live So That God Can Use You”.

We wrap up next week with the third disk on this wonderful retrospective from Alligator Records.