Rise Up
Ronnie Earl & The Broadcasters

Rise Up, the 27th album in Ronnie Earl’s career, takes the listener through a journey that while bluesy, would at times be comfortable in a jazz club. Part studio, part live performances, this 15-song recording is a must for any Ronnie Earl fan. 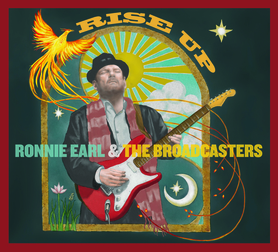 Expertly mixed and featuring The Broadcasters along with Ronnie’s signature Stratocaster tone, Rise Up enjoyably begins with a melodic acoustic adaptation of I Shall not be Moved.  A version which left me with a good feeling from what I just heard and anticipating good things to come.

Featured prominently on this recording are the vocals of Diane Blue. On the second track, Higher Love, Ronnie, and keyboardist Dave Limina set up a nice introduction for Diane’s vocals within this Ronnie Earl written song.

Rise Up contains a few tribute songs; some that pay respect to social consciousness, and many others honor fellow musicians. Diane Blue highlights a live version of Fenton Robinson’s You Don’t Know What Love Is. The longest song on the recording is a Ronnie Earl original titled Blues for Lucky Peterson. This instrumental is Ronnie through and through.

Perhaps the most compelling tribute is a version of Magic Sam’s All Your Love. Again, Diane Blue’s vocals shine. Magic Sam licks never sounded so good as coming out of Ronnie’s Stratocaster. Dave Limina mixes in a nice keyboard between Ronnie solos.

The gospel inspired version of Bob Dylan’s Lord Protect My Child is another opportunity for Diane to showcase her talents. Ronnie’s playing is superb on his original entitled Talking to Mr. Bromberg – a song that is unmistakably Ronnie from start-to-finish.

Mess Around is an up-tempo instrumental that features Dave Limina and bassist Paul Kochanski. The Broadcaster’s swing it on a live jazzy version of Jimmy Smith’s instrumental Blues for J.  The recording wraps up featuring Ronnie on an original co-written with Pete Ward called Navajo Blues.

When speaking about Ronnie, B.B. King said it best:

“…he is one of the most serious blues guitarists you can find today. He makes me proud!”

Rise Up is yet another class recording from one of the classiest and nicest performers in the business.  Ronnie Earl & The Broadcasters fans will not be surprised by the quality of the recording.  For future Ronnie Earl fans, this would be an excellent way to begin your journey into magic sounds crafted from Ronnie’s creativity and smooth guitar playing.  B.B. would be applauding this effort.

A note about Blues Therapy. This book, written by Anita Schlank, Ph. D., and blues fan, contains a series of interviews with blues artists. The goal of the book is to show how blues music helps to heal, including some artist who suffer from mental health issues and addictions. Within, Ronnie Earl is quite open about his past struggles. The book is fine reading and provides insights into the personal life of many we as blues fans revere for their musical talents. Proceeds from the book benefit the HART Fund.