My Babe Interview with Tom TBone Hamilton and Mike Shivvers

This interview began during a conversation between Tom, Mike, and Scott during Anika Chambers’ show at Bradenton Women’s Club

“My Babe” Interview
Scott: Tom, tell us a bit about yourself, and your recent project that celebrates the music of Willie Dixon

Tom: People know me around the Tampa Bay area as T-Bone Hamilton. I have been a Blues bass player in this community for over 30 years. One of the music projects that I currently lead is T-Bone Hamilton & the Blues All Stars. I started the band in 2013 to work with my friends who are also fantastic Blues musicians.

From that start I decided that I wanted to record these excellent musicians. After I gave it some thought, I felt the music of Willie Dixon would be the perfect vehicle for accomplishing this goal. Willie is one of my bass heroes, who also is arguably one of the best post World War II blues songwriters. This led to the release of my 2019 EP T-Bone Hamilton & the Blues All Stars: A Tribute to Willie Dixon. The EP consists of live concert recordings and in studio. It is my fourth as a Producer.

Scott: How did you acquire the nickname “T-Bone”?

Tom: I gave myself the stage name T-Bone. As a kid, my friends would refer to me as hambone. When I started playing Blues, I wanted to have a nickname that stood out. Since I was a fan of Aaron “T-Bone” Walker, I thought T-Bone would be cool since my first name is Tom. The nickname stuck and is my stage name.

Scott: I’ve been a fan of your videography work for some time. Mike, tell us about your site Blues & Roots Digital Archive

Mike: The idea is to have a permanent online archive for Blues preservation. It began almost 7 years ago when I went to see John Mayall’s 80th birthday concert in Sarasota. Since I considered this to be a significant musical milestone, I brought a single camera with me to capture some the show. As there were no objections to the use of cameras, I shot most of the show and offered it to John’s people. Consequently, this began a relationship that continues to this day!

Besides, I became turned off by all the cell phone video that was becoming more and more common. Between shaky video and lousy sound, I didn’t feel it did these bands justice. Furthermore, that is not how I’d want my legacy preserved. I’m also somewhat of a history person and felt there were so many great and untold stories to go with the music.

Scott: Every video tells a story?

Mike: This was so evident to me when seeing John Hammond perform that it really hit home. Hearing him talk about opening for Howlin’ Wolf in 1964 or deciding to finally play ‘My Time Awhile’ at a festival. John introduced it as a Buddy Guy tune. In the audience was Robert Geddins, the song’s real author, who promptly corrected John! These moments are as special as the songs themselves.

To hear him tell these stories with really the passion of a fan, makes you want to hear and learn more. Preserving these types of stories and memories of our blues artists became another facet of what I envision for the Archive. There’s quite a bit more to it, and it’s still in the early stages of development. But I see it becoming a very useful resource for blues fans worldwide over the next several years. 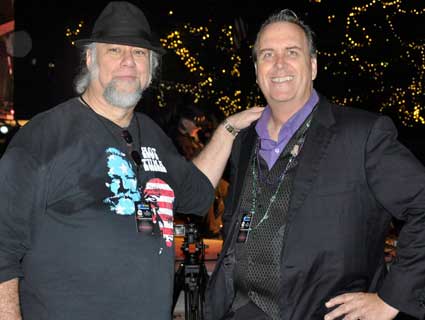 Scott: How did you come together to collaborate the video shoot for “My Babe”?

Tom: I met Mike Shivvers when my band opened for “Braille Blues Daddy” Bryan Lee at Skipper’s Smokehouse. Mike videotaped the whole show and we became friends that night. From that time, we decided to work together to promote Blues nationally. Mike spends a lot of time on the road videotaping modern touring Blues musicians. My web Company West Bay Media Group developed Mike’s current website “Blues Archive.org”. The website is dedicated to preserving the performances of the modern blues artists. Since I wanted to do a standalone music video, I thought the song “My Babe”, which I recorded in studio for my EP would be the perfect soundtrack.

Scott: Why did you choose downtown St Petersburg as the location for the video?

Tom: St Pete was chosen since I have played a lot of music in the city, and because of the cool landmarks. I was kicking around the idea of recording my band on video at a set location in St Pete. Once that fell through, I thought of the idea of rolling the bass past different well-known landmarks in St Petersburg Florida. Mike and I picked the day, which of course turned out to be super-hot, and we shot on location in St Petersburg.

Scott: What are some of those “cool spots” in St. Petersburg where the video was shot?

Tom: In the video I’m walking through this little tunnel in the video. That tunnel is under a sidewalk on Central Avenue. Legend is that Al Capone used that tunnel during the prohibition era.

Scott: Tell us about the challenges with shooting video’s Mike.

Mike: I use between 3 and 5 cameras for a shoot. Each video shoot is different. The biggest challenge is getting good angles and location without interfering with the patrons. Fans are paying to be there and support the venue, the staff, and especially the artist.

For the most part the house lighting is adequate. If I’m doing a specific project for someone rather than only for the Archive, the artists and I might address a lighting issue if it’s bad. My job is to capture the performance as accurately possible, not to be a part of it or in everyone’s way.

I always have the permission of the artist. And with the venue, in case there are certain restrictions on where and how to set up. If I haven’t had a chance to get the artists approval, I’ll still shoot it. However, only after I’ve spoken with them will I post the video. It’s just common courtesy and respectful of the artists, promoter, and venues.

Scott: How about post-production. After the film shoot what happens?

Mike: A 90-minute show might take 8 to 10 hours to edit. I use 3 to 5 cameras depending on the logistics of the shooting location. A 5-camera shoot with soundboard audio can take several days to a week to properly put together, that’s with no distractions.

Scott: Talk about “Our Babe” in the “My Babe” video, who long time Tampa Bay residence will recognize as Nancy Alexander. How did Nancy come to appear in the video?

Tom: That was totally by accident. I was stopping by “Brew D Licious” coffee shop to get a coffee and this blond lady came up to me and stated, “An upright bass, that’s something you don’t see every day”. Since I am a longtime radio fan geek, I asked: “Are you Nancy Alexander?” She replied: “Yes”. I retorted something to effect of – “The fact you know to call this thing an “Upright” and not a cello – makes me even more of fan than I already am!” She replies: “I’m a music chick”.

When we explained what we are doing, Mike asked her if she wanted to be in the video. Nancy enthusiastically said “Yes!”. When we were setting up the shot, she told me not to worry as she is known as “one take Nancy”. We shot the video in one take and gained a new friend! Without her being there in the right place at the right time – I don’t think we would have had such a nice close!!!

Scott: Mike and Tom, thank you for your time and for producing a video that highlights St Petersburg and the blues standard My Babe. Where can readers find out more about T-Bone Hamilton and your projects?

Tom: They can go to my website I also have two Facebook pages that also provide information on my projects.

Scott: What is coming next to Blues and Roots Digital Archive, and how can readers find out more about your work?

Mike: Now I am taking advantage of the unexpected down time to catch up on a backlog of editing. Presently Tom and I are working on a documentary about blues legend AND local resident Bryan Lee. I’m also working on adding content and building both the Archive web site and our social media outlets. These include The Blues & Roots Digital Archive Facebook page and our YouTube channel. Tom and I are also constantly working on new ideas to further promote the blues.