By Monte Adkison aka “The Blues Stalker”

My relationship with Roger “Hurricane” Wilson goes back about 25 years. I first heard Roger play guitar at a local pub that a friend owned who held live music shows on Sunday afternoons for musicians traveling back from gigs in South Florida. In fact, Roger is responsible for my pen name, “the Blues Stalker.”  I had seen Roger play in Florida one of those Sunday afternoons. The next day I was on my way to Oxford, Mississippi, to engage in a Florida Humanities Council scholarship to study the history of blues music at ‘Ole Miss. I spent the night with my sister in Atlanta and we went to a coffee house in Marietta and Roger was playing there. The next evening I was in Oxford and he was playing at a venue on the square there and I showed up to hear him.  So, in 3 days in 3 different states, we collided. On the third day, he asked me jokingly (?)  “Are you stalking me?”

Roger has over 40 years’ experience in broadcasting, television and radio, in addition to being an accomplished songwriter, guitar instructor and musician. Inspired by an Allman Brothers performance in Atlanta’s Piedmont Park, he started playing guitar professionally in 1972. He taught guitar lessons at his own studio from 1973-1985. In 1986 he worked for CNN for a decade and then went on the road in 1996. In 1997 he started his own record label BlueStorm Records. (www.BluestormRecords.com) With over 25 CDs to his credit and many years of touring playing festivals and clubs, Roger still teaches guitar lessons on the internet, teaches Blues in the Schools sessions, judges the International Blues Challenge, continues to write music and record, and tours in his recreational vehicle.

Roger has developed quite a following of fans at RV resorts and campgrounds when he takes his music skills on the road to share with others. With over a half century of experience in the music and entertainment industry, his journey was finally penned in his autobiography “Hurricane” published in 2016. 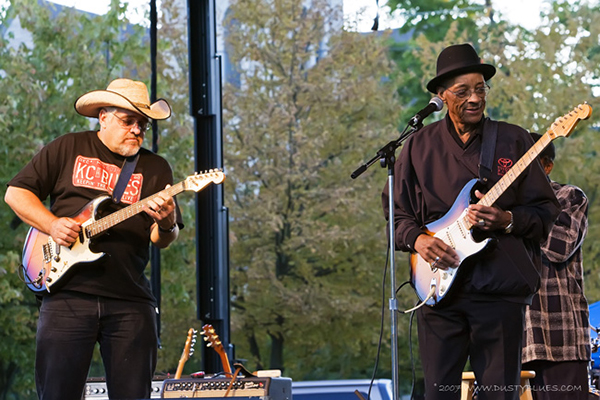 BS:         Roger, in your opinion, what are the best and the worst trends that you have observed in your fifty years in the music business?

RW:       I really appreciate the technology available now for recording, promoting, and distributing music ourselves that gives us total control over our bodies of work. After all of the time I was on the road, working on my own music at home and doing everything from there is very enjoyable and much more productive.

After doing two hundred or so dates a year on the road for a long time, it seems I am reaching more people worldwide than ever before. A big negative is how inconsiderate, rude, and clueless so many audiences are these days. With as much that is out there today, it seems that no one is listening most of the time. Music is  supposed to be listened to and not talked over. There is nothing wrong with dancing and having a good time, but for the singer/songwriter/performer to actually engage and be listened to as opposed to just being heard, the artist has to be selective and choose his or her own audience.

BS:         You have been a judge at the International Blues Challenge (IBC) in Memphis. What advice would you give artists competing for the first time?

RW:       Just present your material as you would at a regular gig. What I mean by that is do what you do. Don’t try to be something you aren’t, or try to throw an act together just for the IBC. As judges, we can see right through that. An example would be having seen numerous musicians come in as a duo, with one playing guitar accompanied by a saxophone player. It most always never works. Muddy Waters once said if you will just be yourself, they will love you.

RW:       My onstage gear is quite simple. For my electric sets, I played Les Paul’s for many years, but settled on Fender Strat’s since the sound was more versatile in my trio situation, which has been the norm for me since the late 50’s. LOL. A minimal effects board consisting of two Boss Delays, one set long and one short, a Boss Chorus pedal, an Ibanez Tube Screamer, and a Dunlop Cry Baby Wah Wah pedal, are more than enough for what I need. As far as amps, I’ve endorsed Peavey amps since the mid 90’s, but a Fender Deluxe has proved time and time again that it can take a licking and keep on ticking. For my acoustic sets, Taylor Guitars have been very good to me with an endorsement deal since 2003. I have a 700, a GS, and a T5, and I do utilize a TC Helicon harmonizer and a Boss RC 2 looper to keep things interesting and fun.

BS:    You participate in Blues in the Schools programs and have recorded several CDs with high school jazz bands. Can you tell us about that experience?

RW:       I simply started out going into classrooms simply trying to let kids know there was life before rap and to pull their pants up. Once they heard the music and some of the stories, they were hooked. It is a shame that the arts have suffered in U.S. education for such a long time. Hats off to organizations, teachers, and administrators that think out of the box by getting it and trying to rally against the ignorance of the constant testers and bean counters.

BS:         You often perform at the Rentiesville Dusk ‘Til Dawn Blues Festival and were inducted into the Oklahoma Blues Hall of Fame in 2015. For those unfamiliar with that festival, tell us about it.

RW:    The festival was founded in 1990 by legendary Oklahoma Bluesman, D.C. Minner, along with his wife, Selby. My first appearance there was in 2003, and I have been back every year since simply because it is the real deal. I was able to get involved with nearby Checotah High School to work with the band director. That led to a number of years performing with the high school band at the blues festival. The Oklahoma Blues Hall of Fame had been created there early on, and since they had created a division for folks that worked in the state, but weren’t native to it, there were a number of us that were formally inducted. It was a real honor. The festival was virtual in 2020, but will be back in person over Labor Day Weekend 2021. All information can be found at: http://dcminnerblues.com/

BS:         Your latest CD, “Live at the Time Out Pub” was actually recorded in 2010 and is charting and receiving acclaim globally. Tell us about the venue and why you chose to recently release it.

RW:    My plan was to release it much earlier, but I got sidetracked with other projects along the way, as well as touring. While recording my sets every night on the road, this one really stood out. The band, Harry Werner on bass, and Scott Stump on drums, who I referred to as The Pennsylvania Railroad, along with the crowd, really locked in that night. The Time Out Pub in Rockland, Maine hosted road acts every Monday night for many years. It was presented by Paul Benjamin, founder of the North Atlantic Blues Festival, who gave many acts a gig on a Monday night as opposed to having to suffer through another empty weeknight on the road with their tongues hanging out. The Time Out Pub closed as a result of Covid 19,  as many venues did, so it was obvious that it was the right time to preserve something else that was now gone.

BS:         With regards to technology—the current options of Vinyl, YouTube, streaming services, CDs, etc. are constantly evolving and challenging for the consumer as well as the artists. You utilize AirPlay Direct to get your music played all over the world. Can you share your thoughts on how artists can best get their music to the people most effectively at this time- particularly during pandemic and post-pandemic times with so many venues closed down.

RW:    For me, I just keep writing, recording, releasing music, and putting it out. If folks like it, that’s even better.

I’ve always played music for me because it was fun, not really caring if anyone was listening or not. That was my approach as a little kid, since I didn’t know any better. As I aged and saw how music transcends geographical, ethnic, and racial barriers, how could I not want to keep on doing it! To answer the question, this goes back to my statement about so many (not all) people not listening in live situations. For musicians, the stage is where you keep your chops up. For others, it’s that fix of the applause that they can’t live without. I suppose I was guilty of that for a time, but somewhere along the way, that addiction left… thankfully! With the internet and digital distribution by way of many devices, and music being so portable that it can be taken anywhere, I think most people are more apt to actually listen. As far as vinyl, I still have a wall of shelves full, but you have to be sitting in one place, probably at home to experience it. Nothing wrong with that whatsoever, but in my case, if I play a vinyl record,  I’m usually transferring it to digital from a USB turntable. Just as well, the digital formats don’t melt in your vehicle when the temperature exceeds one hundred degrees. I’m speaking from experience. 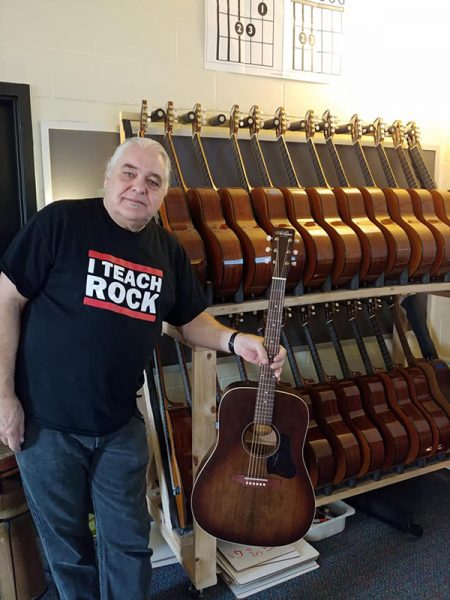 BS:         You travel self-contained in your own recreational vehicle/camper. I know that you have a following of fans at many campgrounds that you use and did I see where you are having an ‘RV tour in the fall where fans can follow you? What a clever idea. Tell us more.

RW: That was an opportunity that surfaced as a result of my wonderful wife, Jolie, understanding how much I was touring, to purchase a motorhome back in 1998 for me to travel and carry a band in. As the band opportunities became more difficult to maintain travel-wise, I elected to utilize different rhythm sections in different parts of the country and abroad. In searching for the best option for travel, downsizing to a van and a pull behind trailer was a suitable alternative. As my solo situation proved to be more economical and less stressful, RV resorts were a pleasant change from the usual run of the mill roadhouse to an audience that would never see or hear me otherwise. And I could hang out and enjoy the facilities and scenery for a few days as well.

BS:    Other than Duane, what artists that have passed do you miss performing the most?

RW:    The legendary Roy Buchanan was a close friend and mentor to me. I met him in the 70’s while doing an interview with him, and we became close friends. So many greats were ever so supportive such as Willie “Big Eyes” Smith, who I actually toured and recorded a live CD with. Many such as Hubert Sumlin, Little Milton, Willie King, Big Jack Johnson, James and Lucky Peterson, and Robert Jr. Lockwood, among others, were all very gracious in telling me personally to stay the course and “Don’t Quit!”

RW:    Folks can order the book and also get a FREE MP3 on the home page at www.HurricaneWilson.com. We’re always looking for new subscribers on my Youtube Channel @RogerWilsonGuitar.