Selwyn Birchwood’s third Alligator CD Living In A Burning House is an absolute sledge hammer of an album! A more diverse and adventurous album than his two previous CDs, Selwyn examines the human condition through 13 tunes, with a thicker, deeper sound coming from his expanded band. Synthesizing all his influences and experiences into his music, what we have here is something that is at once both familiar and absolutely new-a Schrodinger’s Blues, if you will…

Starting hard out of the gate with with the horn flourish and stinging guitar of I’d Climb Mountains, Birchwood lays down the blues funk in the best Luther Allison tradition, with his trademark baritone voice doubled by Regi Oliver’s sax.

I Got Drunk Laid And Stoned mixes hill country blues slide guitar with more gritty sax and funk underpinnings, detailing wild nights doing things we all will regret in the light of the morning, a theme that most of us can relate to.

Living In A Burning House is another funky barnburner about a failed relationship, a recurring theme across this album, the shifting rhythms reflecting the protagonist’s shifting emotions.
You Can’t Steal My Shine is something of a revival rave up, with Selwyn telling us that “you can’t steal my shine” regardless of what else may be taken from him-nothing will get the man down! 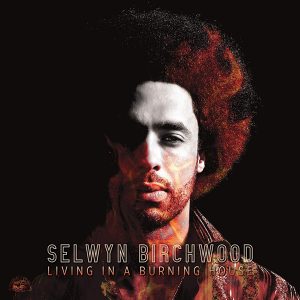 Revelation is deep funk warning about the end times with the horns chasing Selwyn’s vocals and guitar to the edge of… well, you know, that place…

Searching For My Tribe is minor key blues funk, with Donald “Huff” Wright’s bass and Philip Walker’s drums laying down the groove with Selwyn singing about wanting to be alone, but not alone, if you know what I mean…
She’s A Dime is in the classic soul blues mode with Birchwood bragging about his girlfriend-you can hear his trademark smile as he describes his flame in very flattering and saucy terms- I’m sure this one would be a blast to hear live!

One More Time is a slow dance tune with Birchwood pleading his girl to come back, but also wants the truth, even if it hurts… backed up beautifully with Walter May’s organ work coming to the fore, and Oliver’s sax adding just the right touch.

Mama Knows Best is a welcome change, a straight shuffle about bringing that girl home to Mama, who doesn’t approve… Diunna Greenleaf sings the part of Mama, scolding Selwyn like a child caught with his hand in the cookie jar, or worse! I’d love to see these two get together onstage sometime!

Freaks Come Out At Night kicks up the lap steel against a hill country beat as Selwyn channels his hoodoo shaman alter ego singing about the famed Bradfordville Blues Club, a real stomper of a tune, and a real highlight! This might be the best tune on the album.
Through A Microphone is a tune that I could hear Albert Collins playing, if he were still around. It’s a classic funky shuffle with wry lyrics and stinging guitar that recalls, but not copies, the Iceman.

Rock Bottom returns to the funk, again bemoaning his fate, even though he was “baptized in 100 proof”.
My Happy Place closes out the set with a completely different feel, chiming guitars, melodious sax, and a contemplative approach, it recalls Eric Bibb’s Global Griot-a nice way to bring the CD to a close.

The entire CD is astonishing, with Birchwood writing and arranging all the songs here, and doing an absolutely masterful job. The writing and playing is more mature, yet still very fresh and adventurous, with rhythm and texture changes that rival progressive rock, but still keeps a connection to the roots of the blues. Living In A Burning House is an incredible masterpiece of modern blues. Bravo!