Big Al and the Heavyweights Interview

Big Al and the Heavyweights
By Blues Stalker

Al Lauro was born and grew up in the Crescent City and as a percussionist. Al’s musical influences include the rhythms and grooves that only a city like New Orleans can produce. Al spend his early years touring in Europe and the United States as the drummer for David Allan Coe where he shared the stage with many of the greats in the outlaw country music scene.

In 1993 he fortuitously met guitarist Warren Haynes and discovered their mutual love of blues and Southern rock. In 1996 they formed the Unknown Blues Band with Rick Gergen and opened for many stellar acts in Nashville as well as performing at festivals throughout the U.S. Warren went on to play with the Allman Brothers Band and Gov’t Mule and Al founded Big Al and the Heavyweights.

The recently toured Florida hitting all the major venues promoting their 7th CD entitled World Full of Trouble featuring guitarists Bob Margolin and John Lisi, and harmonica ace and former Heavyweight band member Jason Ricci. Their set list includes a mixture of zydeco, blues, funk, rock, with something to please everyone. Gumbo Heads should be ready to party another quarter century with these guys once the virus clears.  Get ready to boogie!

AL: It was a BLAST! A rolling circus full of drugs, sex, and Outlaw Country!  I could write a great book. I appeared on Austin City Limits, The Grand Old Opry and numerous TV shows with him. We toured all over Europe in 1983. David was then based in Big Key, FL. This is near Key West which was then still full of hippies and smugglers (not so many t-shirt shops). David did a free street concert there and we backed up his special guests Greg Allman and Bertie Higgins. David is one of the most underrated true country artist and songwriters. Hopefully one day he will be in the Country Music Hall of Fame

BS: How did you meet Warren Haynes and discover your mutual musical tastes?

AL: We met in Baton Rouge. David’s then girlfriend Meme Broussard’s family was from Gonzales, LA. She and David were there to spend Christmas with her family. David had shows scheduled on Christmas Eve and Christmas night. Wendel Atkins band was from Texas and they were David’s backing band. They wanted to be home during Christmas, so they left in the middle of the night before the shows. David had to put a band together.

Meanwhile, Meme and I had a mutual friend Harold Mator who drove one of David’s semi-trucks. Mator called me and said David needed a drummer and would I be interested so I auditioned and joined up. I was wondering who the guitar player was going to be and they said he is flying in from Asheville, NC and that was Warren Haynes!

Most important, through spending countless hours on the bus together listening to music, Warren and I discovered a mutual love for roots music especially blues, southern rock, and soul. We had both moved to Nashville so we formed a band the Unknown Blues Band and we performed when David would take some time off from the road. 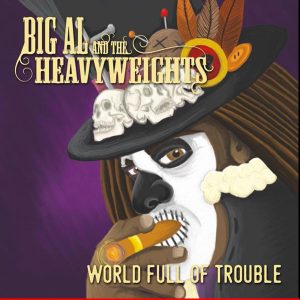 Big Al and The Heavyweights

BS: Who currently makes up the Heavyweights when touring?

AL: Currently, Wayne Lohr who has been with me for 10 plus years and is in the Louisiana Music Hall of Fame plays keys.  Mark Parsons on Bass guitar, and Marcel Anton on guitar. Sometimes my long-time friend and harmonica player, “Roguie” Ray Lamontagne (Ray Lamontagne’s Dad) joins us on the road. It is hard to make money as a 5-piece band so unfortunately; I do not always have a harp player.

BS: Not too many bands have a drummer as a band leader. You perform with many exceptionally talented guitar and harp players who are front and center in talent and ego and command a lot of attention. Is that ever a problem for you as a bandleader?

AL:Not really. I am blunt and make sure everyone understands their role. We are a band FIRST!

Above all, we are not about one guy and his ego so one guy does not make or break Big Al & the Heavyweights. I have has blessed to play with some incredible harp players.  Roguie Ray who I mentioned before who is in his seventies and he will still play with me. Harmonica Red who also played with David Allan Coe and is freaking amazingly talented. He is on several of my CDs including Nothin’ But Good Lovin which Bruce Iglauer, president of Alligator Records, produced for me.

Presently, Red now lives in Kentucky. William Howse from Nashville one of my favorites. Of course, my long-time friend and a guy who has been in the band twice the incredible Jason Ricci. I am so proud of him.

BS:  You recently toured Florida before the music scene shut down due to the corona virus. I was fortunate enough to see you perform at Skipper’s. Care to share your thoughts and memories of that last touring adventure? Let us pray that those venues that have been loyal supporters of live music for years can survive this economic fiasco.

AL: Well I have been playing Skipper’s for over 10 years. The late great Rock Bottom got me in there. Tom White the owner of Skipper’s has been a supporter of the band and a forever friend. We just played there with Unknown Hinson.

It was a great Florida tour, as always. We played the Villages for the first time. Marcia and Mark are great hosts and it is an incredible gig. We also played The Barrel House in Ft Myers for the first time and for my great friend Vince at the Double Roads in Jupiter. We had a tour coming that way the 2nd week of May, but that did not happen. I have never been home this long, and I am so ready to get back on the road. That is what we LOVE and what we DO. I do not get how they can just shut it all down.

BS:The title of your latest release, World Full of Trouble now seems very prophetic. Your home, New Orleans, is a city that thrives on its music and entertainment as well as its culinary reputation and eating establishments. What is it like now living there and how are artists such as yourself coping and surviving?

AL:It is like a ghost town. Like Florida, all the restaurants and bars shut down and lots of people are out of work. I keep hearing about this virus all over ‘Nola but it’s actually confined to a certain very unfortunate segment of the population. It is obviously very contagious especially to the elderly and those with preexisting health conditions. I live 60 miles North of ‘Nola in Hammond, LA. I work on the side for a storage container company and have now for many years. Consequently, old guys like me must have health insurance plus I am a single parent with a 16 yr. old son. I am not coping well at all. I am very restless, but I farm and raise chickens, so it keeps me occupied.

BS:  When this pandemic is all over, life as well as the music scene will certainly change. Any thoughts of what may emerge as a result?

AL: Jesus, hopefully people will not be scared to get out and there will be some venues left. I mean how long can these places hang on. I think people will realize and hopefully appreciate life much more because you can see how quick they can take it all away from us. Pretty freaking scary to me. Do not even get me going.

BS:  How can we as fans best help keep alive the music we love?

AL: Come to live music shows, support the venues, bands, buy a CD, T-shirt, put something in the tip bucket, tip the bartenders and waitresses. Do not complain about a 5-dollar cover. People spend 5 dollars eating at McDonalds or in a Walmart, but heaven forbid a venue is charging 5 dollars to see a band. Pay it and smile!

BS: In isolation, can you tell us what you have been working on? Have you taken this opportunity to write new material?

AL: Yes. Specifically, we have been working on songs for a new CD that Luther Dickinson from the North Mississippi Allstars will be producing for us. Always something to look forward to in the Heavyweight World!

Thanks, Al, for touring in Florida and sharing your talents with us. Wishing you and your band the best and hope to see you back on the road soon.

Big Al and The Heavyweights