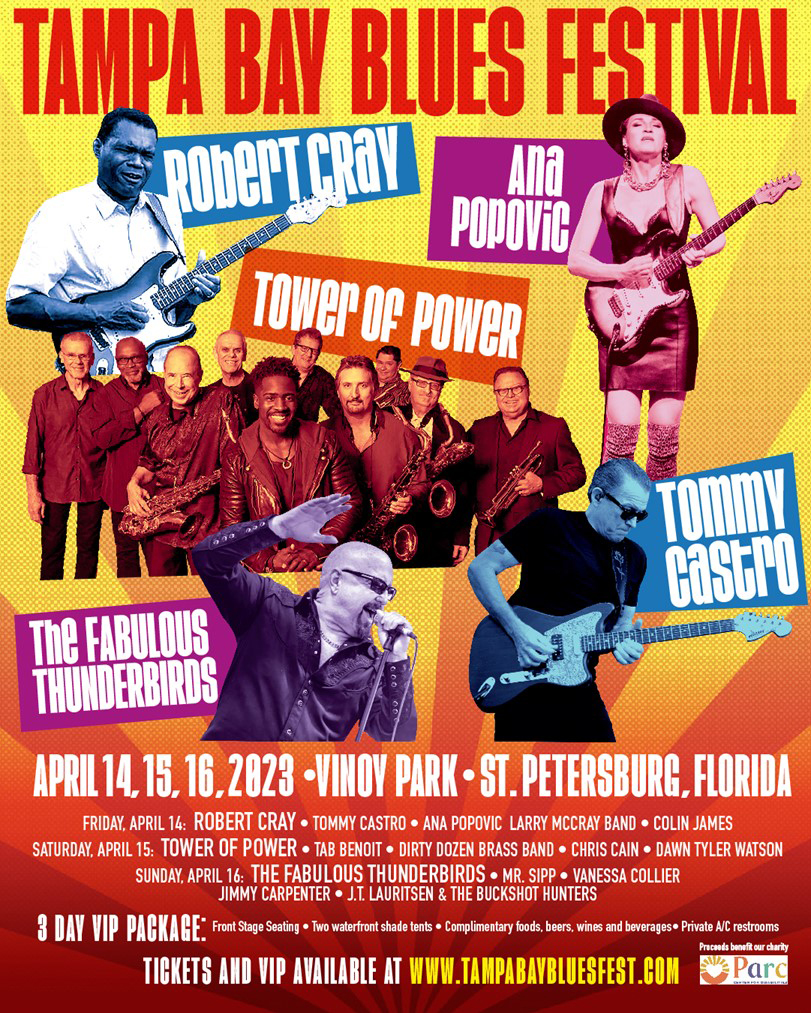 Blues is the foundation of American Music, from Gospel to Jazz, from
Rock-n-Roll to Hip Hop. Blues music is the springboard that launched it all.

Suncoast Blues Society and TBBF are committed to introducing youth to this historic form.
We are making a special offer to our next generation of Blues music lovers…

Youth up to age 18 and a chaperone can receive a
Free Complimentary Pass!!

Your Suncoast Blues Society just wrapped up another busy year. Here are some of the things your Board accomplished in 2022 that reflect our mission statement:

Dedicated to celebrating and promoting the musical genre known as the blues,

and sharing blues music with current and future generations in the Tampa Bay Area.

You would never guess by talking to him (lol), but Vinny was born and raised in NY. He has been in love with music since the day he was born and has been broadcasting radio music shows since he was 16.

Vinny began writing album reviews and conducting written interviews with musicians that led to his creating Music On The Couch. That can now be heard, along with his other show Roots & Fruits, on the True Grit Roots Network.   “I love what the Suncoast Blues Society does and how they are constructed and I want to be a part of it and help continue to grow in this area.”

Carole is a native of St. Louis, home to many famous Blues musicians and grew up playing music and attending concerts. These early musical experiences provided the basis of her love and appreciation of musicians and their craft.  Carole became a member of the Suncoast Blues Society shortly after moving to Florida in 2015 – you may recognize her as the lovely lady who is always willing to take your money in exchange for a cool shirt or a new CD at one of our SBS events.  Carole has been a member of civic organizations in her hometown of New Port Richey for seven years, volunteering at many charity events.  “I am looking forward to applying my leadership and organizational skills to the advancement of the Suncoast Blues Society.”

Mark is a past Board member and former President of the Suncoast Blues Society.  After stepping aside for a few years, he has decided to return to the Board in hopes of working on developing a stronger Blues in the Schools presence, initially in the Bradenton community and spreading from there, by establishing solid partnerships with organizations like Realize Bradenton to accomplish that goal. Mark is also a writer for Blues Blast Magazine, Blues Music Magazine, and the Chicago Blues Guide website. “I have been listening to Blues music for more than five decades.” 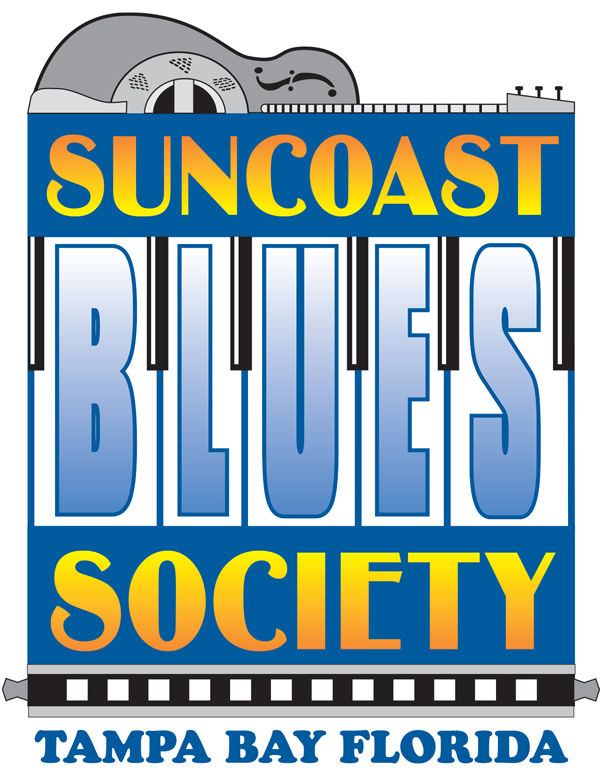 Well folks, another year coming to a close. Life moves on and with it comes change and so it is for your Suncoast Blues Society.  Three of our Board members, Scott Morris, Pat Smoot and Jesse Smoot, are retiring after 3 years of ‘active duty’.

Jesse was our Secretary for a few years then took on Membership and did a great job organizing and updating our system to reflect current needs – no small task but perfect for someone as detail-oriented as Jesse is.  In addition, he updated our Bylaws and worked with his lovely wife, our Merchandise guru. Pat is one of the most organized people I have ever met! She was an experienced buyer before retiring and inventoried and organized all of our merchandise.

Pat & Jesse are a great Team – they were always the first ones to arrive and set up at the Festivals and the last ones to pack up and leave. They kept our old trailer in working order and more than once hosted Board meetings at their lovely home.

Scott wore multiple hats during his tenure including Treasurer, working on content for our weekly eblast such as CD and event reviews, FB posting, and organizing multiple events. In addition, he dragged us kicking and screaming into the 21st century by updating our website to include online sales of merchandise and improving our online documents and records storage which was a huge project. It will take at least 3 people to replace him!  We wish him well in his next adventure, S&B Sound.

We have been truly blessed to have had the opportunity to work with these folks – be sure and thank them when you see them out and about.

Stay tuned next week to meet our 3 new Board members! 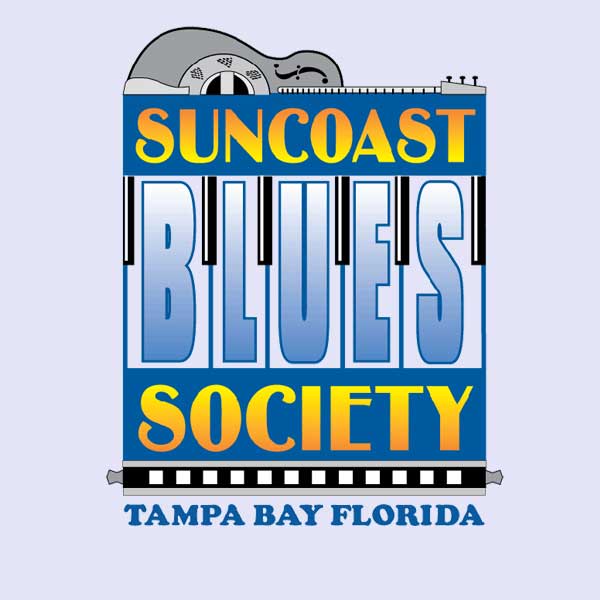 Your Suncoast Blues Society will be partnering with the Palladium for a special Holiday Show on November 19th featuring Southern Hospitality! SBS members will have the benefit of a $5 discount on tickets with a special code that will be included in next week’s eblast so stay tuned!!!!

October 20-22 is Camping with the Blues and Mother Nature has perfect weather planned for us! Your Suncoast Blues Society will be there as always, selling memberships and limited merchandise. We will be offering 3 free CDs with every membership/renewal so be sure and stop by.

Johnny’s  long awaited new album, “Into Your Blues”  will be available for purchase at these shows – their first tour behind the new release. It is in the first round for the Grammys nominations and features 11 originals songs, representing Dallas Blues guitar with Mike Morgan, Chicago Blues guitar with Johnny Burgin, a special guest appearance with New Orleans legend Little Freddie King, and a collaboration with Johnny and New Orleans “Mooncat”, the unstoppable Jason Ricci. Some come on out to one, or both, of these shows and get your signed copy. 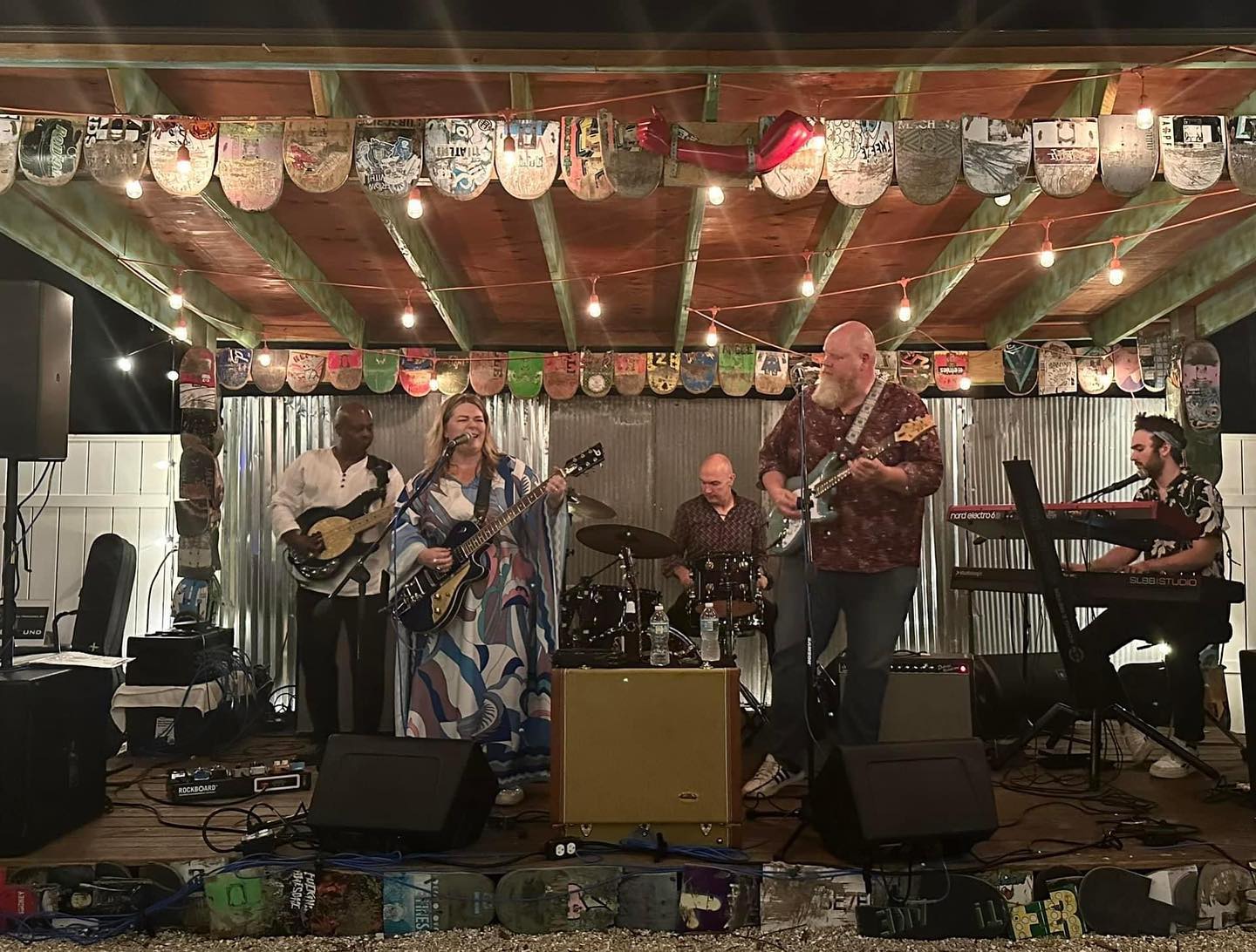 Put this band on your radar!

Based in Iowa, the Avey Grouws Band is on a limited tour of Florida and stopped into Bradenton to perform a wonderful show at Birdrock Taco Shack.

Unlike it’s sister restaurant, Cottonmouth southern soul Kitchen, Birdrock sustained limited damage from Hurricane Ian and is up and running  bringing the best of blues to Bradenton. In the comfortable and roomy courtyard at the “shack” Avey Grouws showed the audience why they are two-time International Blues Challenge semi-finalists. 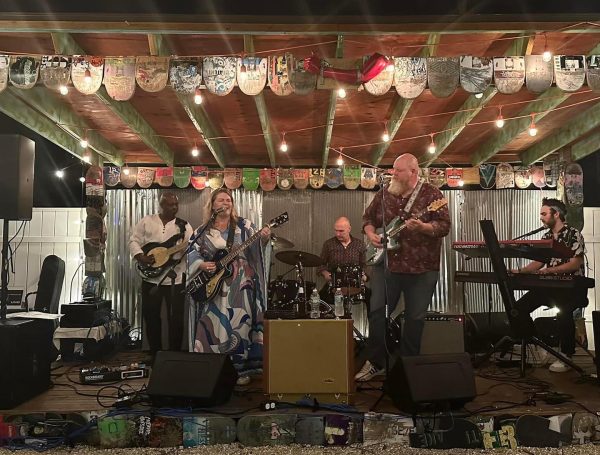 Right out of the gate we heard Jeni’s powerful and dynamic voice with “Hearts Playing Tricks,” and not to be outdone Chris and his impressive guitar skills showcased on a version of “Black Cat Bone.” Presenting their quirky and humorous side, the band performed the first of a few “drinking” songs – “Two Days Off (And A Little Bit of Liquor).” As Jeni described, this song’s lyrics, like many do, came from keeping ears open to what others are saying.

Rotating to their first EP Road To Memphis, Chris took vocal lead on “Hard Times.” Returning to the second recording The Devil May Care, “Let Me Sing The Blues” gave Leo time to shine on the keyboard. The lovely song “There For Me” showed the bands tight vocal harmonies and might have been my favorite moment of the evening.

Local guitarist Vincent Sims, who became familiar with the band while on tour with Lauren Mitchell, was in attendance and Jeni asked Vincent to the stage. Vincent sat in on while Jeni sang “Love Me Like A Man,” and then with Chris as they traded licks on “Early In The Morning.” Good stuff!

Peppering the shows with stories from the road, many which had the crowd laughing, the band ended the first set after crushing their “Dig What You Do,” again with some nice vocal harmonies – this time with Jeni and Chris.

“Dirty Little Secret,” well, you will have to attend a show to find out what this song is about! But the secret is in “the way you roll.” A version of Albert Collins’ “Honey Hush!” was most enjoyable. “Let’s Take it Slow’ brought the tempo down and that song was responded to by  “I’d Rather Be Drunk,” a fast-paced song reminiscent of “Mojo.”  The show concluded with a rocking version “Love Raining Down.”

This is a gem of a band. What a fun time at Birdrock Taco Shack with Avey Grouws Band!

There are two more opportunities for you to see the band: