If you talk to any great blues guitarist, I bet most would say early urban blues greats like B.B. King and Buddy Guy were big influences on them in the beginning of their blues education. But as they matured and learned more about blues guitar I bet you might hear them say that T-Bone Walker was an even bigger influence on them.

The more you learn about T-Bone the more you appreciate him and his guitar playing. Plus he was a great songwriter too. I can’t remember any songs that BB King wrote—can you?

And even though he played a more “uptown” style of blues guitar than the more rockin Chicago blues, I bet the blues rockers at least listened to him. Even rock guitarists like Chuck Berry and Jimi Hendrix were heavily influenced by T-Bone.

And if you talk about more modern blues guitarists, Duke Robillard and Ronnie Earl practically made their careers copying T-Bone licks note for note.

“When I heard T-Bone Walker play the electric guitar I had to have one.”- B.B. King

“All the things people see me do on the stage I got from T-Bone Walker.” – Chuck Berry

“When T-Bone Walker came, I was into that. That was the sound I was looking for.” – Albert King

In fact, T-Bone Walker may have been the first guitarist to play behind his head and be a real showman with his guitar on stage. Certainly Hendrix’s showmanship and Chuck Berry’s duck walk were influenced by T-Bone’s stage antics. Not to mention later “tricks” by Stevie Ray Vaughan and many others.

And I’m sure this is true for many who heard their first blues in the 60’s and 70’s. It came when The Allman Brothers played his classic Stormy Monday, on their Live At Filmore East album from 1971. Who can forget Duane Allman announcing, “This is actually a T-Bone Walker song…” during the songs introduction. Their version probably turned on more people to T-Bone Walker than any other version. It’s still a classic.

You can see where they got the arrangement from Bobby Blue Bland’s version. The lead is pure T-Bone though. 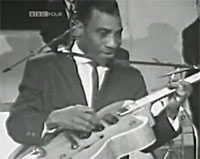 T-Bone Walker, real name Aaron Thibeaux Walker, was born in Linden, Texas in 1910, and was of African American and Cherokee descent. Walker’s parents, Movelia Jimerson and Rance Walker, were both musicians. His father left soon after his birth and his mother moved to Dallas.

His mother soon married, Marco Washington, who taught him to play the guitar, ukulele, banjo, violin, mandolin, and piano.

Early in the 1900s, the teenage Walker learned his craft among the street-strolling string bands of Dallas. His mother and stepfather (a member of the Dallas String Band) were musicians, and family friend Blind Lemon Jefferson sometimes joined the family for dinner.

Walker left school at age 10, and by 15, he was a professional performer on the blues circuit. Initially, he was Jefferson’s protégé and would guide him around town for his gigs.

In 1929, Walker made his recording debut with a single for Columbia Records, “Wichita Falls Blues”/”Trinity River Blues.” He was billed as Oak Cliff T-Bone in those days. Oak Cliff was the community he lived in at the time and T-Bone a corruption of his middle name. Pianist Douglas Fernell was his musical partner for the record.

Walker married Vida Lee in 1935; the couple had three children. She was his one true love for his entire life and he wrote many songs about her.

Walker moved to the West Coast around 1930, probably due to the hard depression life of that time in Texas, and he often is grouped into that West Coast style of blues along with Charles Brown and Clarence Gatemouth Brown, and other of the “jazzier” blues musicians. But Texas might argue that description. He is often associated with the Texas blues sound as well.

By age 25, in around 1935, Walker was working the clubs in Los Angeles’ Central Avenue, sometimes as the featured singer and guitarist with Les Hite’s orchestra. He was developing a reputation as a singer, guitarist, and showman, and was experimenting a lot with the electric guitar, a Gibson ES-250 and a matching EM-185 amplifier. He was good friends with Charlie Christian and both are credited with being some of the earliest guitarists to play the electric guitar. 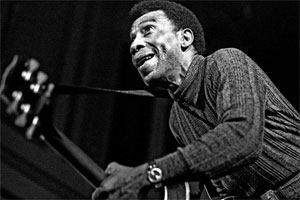 By the early 40’s Walker had perfected his sound and was ready to record and break out as a major blues star. Jump blues was coming into its own and T-Bone became associated with that style.

In July 1942 he was signed to the new Capitol label and began recording as part of Freddie Slacks fifteen piece band. He cut his first two classics, “I Gotta Break Baby” and “Mean Old World” showing his easy swinging vocals and his distinctive guitar sound and riffs that would become classic T-Bone.

But the second world war put a damper on his career as recording music was banned. For the rest of the war his recording career was put on hold. But he still was a major performer in clubs and concerts.

From 1942 he was a regular at the Rhumboogie club in Chicago and when it closed in 1945 the owner started a label, Rhumboogie Records, and T-Bone was one of the first artists to record for the label. He recorded ten tracks for the label and having had some success he decided to move back to the hottest music scene in the country, Central Avenue, Los Angeles. He was soon booked in as the star attraction at the Club Alabam, the hottest club on the strip.

In 1946 he signed to Black And White, though he was sought by many bigger labels. This was the start of T-Bones golden period. The immortal classic “Call It Stormy Monday” was recorded in his third B&W session in September 1947. This was to become the most famous of T-Bones tunes and has been covered by many artists.

During November and December of that year, he recorded over 30 tracks because there was a recording ban starting at the end of 1947, and the record companies needed to stockpile the masters for later release. Some of the later recordings had quite a jazz tinge and “Inspiration Blues” shows a clear bebop influence.

“T-Bone Shuffle,” probably his best known song and most covered, other than Stormy Monday, was a hit in 1949 as was “Go Back To The One You Love” in 1950.

His last session with B&W on December 29th, 1950, produced more classic tunes such as “I’m Still In Love With You“, one of T-Bones most romantic songs, and “West Side Baby” which was also a big jukebox hit. By this time Capitol Records had bought all the B&W recordings and was reissuing the best tracks for jukeboxes across the country. This was to be the end of his golden period, though he produced much great work after this time.

During the mid 50’s he recorded for Imperial Records and recorded his only record over the next five years. It was really a compilation and also re-recordings of many of his classics, called T-Bone Blues, recorded over three widely separated sessions in 1955, 1956 and 1959, and finally released by Atlantic Records in 1960. This is one of my favorite T-Bone albums and contains many of the songs I most associate with T-bone… although there are other great classics.

The late 50’s and early 60’s were quiet years for T-Bone as rock ‘n’ roll pushed the blues into the background. Luckily for blues musicians, Europe was still quite new territory for traditional American Blues, so T-Bone joined forces with other blues luminaries to join a special tour.

Starting in 1962 in Hamburg, Germany, he was part of “The American Folk Blues Festival” playing and singing on the tour which was recorded for European television audiences. That festival lasted for over 20 years and you can learn more about it and watch some great videos here.

The Twilight of His Career

Things turned around for T-Bone by the mid sixties and he found a new audience with the white middle class, playing folk clubs, colleges and more European festival tours.

T-Bone continued to record through the sixties and he made some excellent recordings for the Bluesway label in 1967 and 1968. In 1970 T-Bone was awarded a Grammy for his album “Good Feeling” he had recorded in France for Polydor in 1968.

His health began to deterioriate due to his long-standing drinking problem, and following a recurrence of ulcer problems in 1974, T-Bone was admitted to the Vernon Convalescent Hospital in Los Angeles for the treatment of pneumonia. He passed away on the 16th of March 1975.

T-Bone Walkers sound and playing style is truly his own. He as a unique phrasing style with staccato runs that are both unusual and smooth and melodic at the same time. You won’t find many guitarists these days that naturally have a feel for his style. He starts runs on off beats and cuts them off in unusual places.

This Is A Great Video Of T-Bone At His Best

Of course, Duke Robillard and Ronnie Earl are among the modern guitarists who do a great job keeping his style alive. Duke in particular can be heard playing T-Bone lines note-for-note. Here’s some videos that show him at his T-Bone best.

And you can find some great instruction on his sound and the West Coast and Jump Blues style at TrueFire.com.

His amp was often a Fender tweed 4×10 Bassman. In the late 30s and early 40s, T-Bone is reputed to have plugged into a Gibson EH-150 and the EM-185 mentioned previously.

His sound was basically clean with only a small amount of distortion.

T-Bone Walker will forever be a major influence on blues guitar. Each new generation “discovers” him and wants to learn his licks and his amazing phrasing. You can identify T-Bone within a few notes—always a sign of a great guitarist.

And his songs, written mostly by himself, are classics both in their arrangements and in their soulful unique style. They took the blues to another level, and to a different more uptown audience. You might even say he was ahead of his time.

All I know is, I sure do love his playing and trying to learn his style will keep me challenged for years to come.