Anyone who follows The Blues knows about Stevie Ray Vaughan. He took the blues world by storm back in 1983 when he came out with Texas Flood. Actually his big break came earlier when David Bowie saw him playing the Montreux Jazz Festival in Switzerland, back in 1982. Bowie asked him to play on his album Let’s Dance, and his tasty playing got everyone’s attention.

But Stevie had been playing long before that. He got his first guitar at 7 and was in his first band by age 10. He hailed from Texas in the Dallas area, but quit high school at 17 to pursue music full-time in Austin Texas. That was back in the early 70’s. So SRV had been a professional musician for over 10 years when he got his break with Bowie.

Vaughan’s Affect On The Blues Scene

No one can ignore the fact that Stevie Ray electrified the blues scene. His high energy style and showmanship brought the blues scene back to life and prompted many boys (and girls) to pick up the Stratocaster guitar and try to play like him. His style was so distinctive you can still hear his playing in many young blues guys like Kenny Wayne Shephard, John Mayer and Johnny Lang.

Stevie Ray’s style became so common among young blues guitarists that it became a bit of a cliche and many rebelled at the style. I know for me, hearing other guitarist’s playing in his style became a sign of non-creativity and I avoided sounding like him at all costs, even though deep down I loved his playing and admired his sound. Such is the price of fame, or ego in my case. 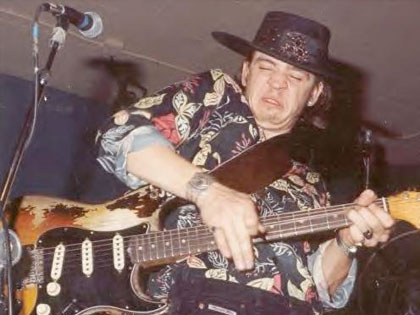 Stevie Ray Vaughan’s style was one part Albert King and one part Jimi Hendrix and another part Otis Rush, with a touch of his brother Jimmy Vaughan in there for seasoning. Lonnie Mack was also a big influence. But he really did take all of their styles and turn them into his very own thing. You can tell it’s Stevie Ray within the first few notes of a solo. That’s the sign of someone who has reached the mountain top as a guitarist especially in the blues.

And he will always be associated with the Fender Stratocaster guitar which was a big part of his sound. He played many Strats over the years, but his signature SRV Strat was the one he used the most often. A copy of that guitar was later released by Fender as the Stevie Ray Vaughan Signature Model. Click here for more… Stevie Ray Vaughan Stratocaster Electric Guitar with Vintage Tweed Case

. Another sign that you’ve reached the top in your guitar playing. The guitar is still available.

Stevie Ray started young, as was already mentioned. He played in bands around Dallas from the time he was 11 until he left at 17. His bands did well in Dallas and included local favorites Cast of Thousands and the first band of his own called Blackbird. He played in all the local clubs and reportedly slept through much of high school because he was so tired from working the night before.

Blackbird also traveled around the state a little including playing in Austin Texas. He realized that’s where he wanted to be and moved the band to Austin in 1971. He played in that area for 6 years and later in several other bands like The Nightcrawlers, where he met Doyle Bramhall, and Paul Ray and the Cobras. In early 1977, The Cobras released two singles and were named “Band of the Year” in an Austin Sun reader’s poll.

During a month-long break from performances, Vaughan won the opportunity to participate in a jam session at Antone’s with Albert King. Owner Clifford Antone witnessed the performance and concurred that the jam session was “the best I’ve ever saw Albert or the best I ever saw Stevie”.

For a time when Paul Ray had throat problem, Stevie took over singing duties and realized he could front his own band if he wanted. But first he formed a band called Triple Threat Revue with singer Lou Ann Barton. When Barton was fired for messing up a gig, the band went on as a power trio called Double Trouble, after an Otis Rush song, and the framework for Stevie Ray Vaughan’s future was in place.

After Stevie contributed to David Bowie’s album in 1983, Let’s Dance, the doors began to open. He was even asked to tour with Bowie but declined at management’s suggestion. His star was rising too fast to waste any time. That’s when John Hammond took him under his wing.

Double Trouble had already recorded an album by the name of Texas Flood. In June of the same year Epic remixed and released Texas Flood. The album spawned several singles, including “Pride and Joy”, “Love Struck Baby”, and “Mary Had a Little Lamb”. By the end of 1983, Texas Flood received a Grammy Award nomination for Best Traditional Blues Recording. “Rude Mood” was nominated for Best Rock Instrumental Performance.

Stevie’s hard work and years of playing was beginning to pay off.

But as usual, there were bumps in the road ahead. He began to drink heavily and his cocaine addiction was taking over. He survived, but he even admits that drug and alcohol abuse affected his playing and brought about many less than steller concerts. I attended one myself in the mid 80’s where Stevie played too-long, meaningless solos and I left saying… “What’s the big deal about this guy?” I didn’t realize that night was probably one of those drug-induced nights that he would come to regret.

His low point was soon to come.

During a tour of Europe a month later, Vaughan was hospitalized in Ludwigshafen for suffering from near-death dehydration after years of alcohol and substance abuse. Tommy Shannon said that as Vaughan tried to get up from his hotel bed, he vomited all over his chest and was covered with a puddle of blood.

We called an ambulance, and these German medics showed up in long white coats, shouting German to one another. They pulled out I.V.’s and we were screaming, ‘Hey! Wait a minute! What the hell’s going on?’ They spoke not a word of English, and we spoke no German. They put I.V.’s in him, and they wanted to take him to the hospital. We were yelling, ‘Where are you taking him? What’s happening? How will we find him?’ They were giving him saline solution because they’d determined, by looking at his eyes and checking his vital signs, that he was suffering from near-death dehydration. They were trying to hydrate him. While he was laying on the bed, I looked into his eyes, and it was like looking into the eyes of a dead deer on the side of the road. They were almost dry, with no life in them. I got scared shitless.

All of a sudden, the life came back into his eyes, and he said, ‘I need help,’ real weakly. I took that as the moment where he realized this has got to change. Not like, ‘I need to get better so I can go back to doing what I’ve been doing,’ but ‘everything has to change.’

Stevie Ray Vaughan went into Peachford Hospital, a drug rehabilitation clinic in Atlanta, to begin a full recovery. A month later he came out and he began a new stage if his musical career. This was 1987 and was ready to change his life and his career. His next album In Step, would be a new direction for him and although the music was excellent, he would never reach the critical acclaim of his early albums again. I doubt he cared. He was back to being a real human being again.

In August 1990, Double Trouble opened for Eric Clapton during two concerts held at Alpine Valley Music Theatre in Elkhorn, Wisconsin. After the show, Vaughan was leaving in a helicopter when it crashed into the mountain side. Vaughan died instantly along with members of Clapton’s road crew.

Vaughan owned and used a variety of guitars during his career. His guitar of choice, and the instrument that he became most associated with, was the Fender Stratocaster, his favorite being a 1959 model acquired in 1974, this guitar was bought by Stevie Ray’s wife who asked her friends to help her financially, it was a gift for his twentieth birthday. He started using the model during high school and used it exclusively in his live performances and recordings.

Vaughan refers to this instrument as his “first wife”, his fans refer to it as “SRV’s #1”. Vaughan bought many Stratocasters and gave some away as gifts. A sunburst Diplomat Strat-style guitar was purchased by Vaughan and given to his late girlfriend Janna Lapidus to learn to play on.

Vaughan used heavy strings, tuned a half-step below standard tuning. He preferred a guitar neck with an asymmetrical profile (thicker at the top) which was more comfortable for his thumb-over style of playing. Heavy use of the vibrato bar necessitated frequent replacements; Vaughan often had his roadie, Byron Barr, obtain custom stainless steel bars made by Barr’s father.

Vaughan was also photographed playing a National Duolian, Epiphone Riviera, Gibson Flying V, as well as several other models. Vaughan used a Gibson Johnny Smith to record “Stang’s Swang”, and a Guild 12-string acoustic for his performance on MTV Unplugged in January 1990.

On June 24, 2004, one of Vaughan’s Stratocasters, dubbed “Lenny”, was sold at an auction to benefit Eric Clapton’s Crossroads Centre in Antigua; the instrument was bought by Guitar Center for $623,500.

Vaughan was a catalyst in the revival of vintage amplifiers and effects during the 1980s. His loud volume and use of heavy strings required powerful and robust amplifiers. Vaughan used two black-face Fender Super Reverbs, which were crucial in shaping his clear overdriven sound. He would often blend other amps with the Super Reverbs, including black-face Fender Vibroluxs, and brands such as Dumble, and Marshall, which he used for his clean sound.

While his mainstay effects were the Ibanez Tube Screamer and a Vox wah-wah pedal, Vaughan experimented with a range of effects. He used a Fender Vibratone, designed as a Leslie speaker for electric guitars, and provided a warbling chorus effect, which can be heard on the track “Cold Shot”. He used a vintage Dallas Arbiter Fuzz Face that can be heard on In Step, as well as an Octavia.

A detailed gear diagram of Stevie’s 1985 “Soul to Soul” touring guitar rig created by Adam Cooper can be seen here. The diagram is based on multiple interviews conducted with long-time SRV guitar tech and effects builder, Cesar Diaz, and comes from the guitar website GuitarGeek.com.