Learning from a Concert 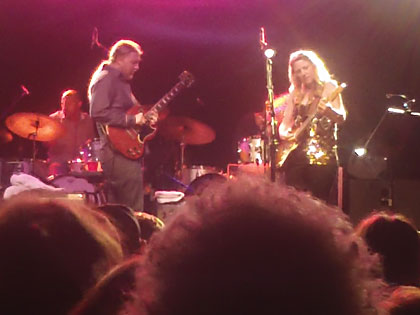 Over the years I’ve been to many concerts, both blues concerts and others. As a guitar player and music lover, these concerts have often been big inspirations to me. I’ve gotten to study other guitar players and got to see how they play a song and what equipment they use. Plus just listening to the music is also a rush.

If you’re a guitar player I bet you may see a blues concert in much the same way as I do. As a musician we don’t watch concerts in the same way as the average music lover. We tend to pay more attention to the “how” instead of just the “what.” By that I mean if you are a musician, you tend to watch the musical interplay between the musicians on stage, and often think about how they put the set list together and exactly how they play songs from an arrangement point of view. You watch for chord voicings and guitar sounds and what role the musicians are playing in the song.

We want to see how it’s done.

You never forget your first big concert. Mine was seeing The Kingsmen at The Surf in Nantasket Beach, just south of Boston in around 1965 when I was 17. Ya a long time ago I know. The Kingsmen had the gigantic garage rock hit, Louie Louie, so certainly seeing them was special. But this show was small. The Surf only held around 1000 people. Today a band with a hit like that would be playing to 30-40,000 people at a time. And I remember the opening act was Barry and The Remains who was the biggest local Boston band of the day. They had the big local hit Don’t Look Back. And they had that great garage rock sound of the 60’s. Definitely an inspiration for becoming a guitar player. These were local guys after all. 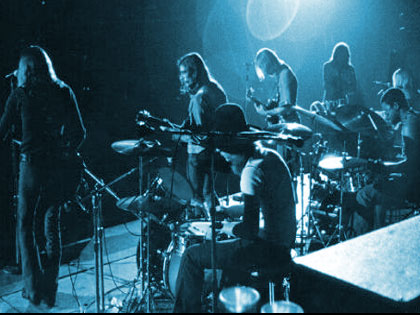 Most of my concerts back then were in small clubs seeing local or regional bands. Still those shows were always memorable to me and a big part of why I became a musician. The excitement, the adulation, and the general buzz around the band made me say… “I want to do that!” This might have happened to you.

Although these early concerts weren’t blues shows as such, I was slowing becoming aware of the blues. Here’s one of the early bands that turned me onto the blues… and much more.

When I got a little older and a bit more hip to the blues and music in general, one of the bands that really knocked me out was The Allman Brothers. Compared to other hippie bands of the time, like The Grateful Dead or The Stones, The Allmans took it to another level.

Now you could argue that the Allman’s were not really a blues band but they sure had a lot of blues songs in their setlist. On the Live At Fillmore East, who wasn’t influenced by the T-Bone Walker song Stormy Monday. After all Duane introduced the song as being a T-Bone Walker song so that was the first time I had ever heard of him. This is probably a big part of what made the song such a classic, although it’s been played by many other people besides the Allmans.

I went to three Allman Brothers shows in the early 70’s. One was at the Orpheum in Boston. And another was on Boston Common during an outdoor show. I remember J. Geils opened for them that day.

Duane Allman loved the blues and played on lots of other people’s albums including his famous solo on Boz Scaggs “Loan Me A Dime.”

There’s no question that the Allman’s made me aware of what it takes to be a great band. Not just individual players playing a song, but a group of musician’s who played as ONE and where the musical whole was greater than the sum of it’s parts.

Everyone in the Allmans listened closely to each other. And other than Duane, no one was a virtuoso at their instruments. They just played well together and the song became much more than it typically would be.

There was no question when you saw an Allman Brother’s show you could see that they were willing to take chances. The songs were largely improvised except for the core structure. And a lead was seldom played the same twice. This was the way music should be played… in the moment with everyone creating right there and then. After seeing the Allman Brothers my view of music would never be the same.

And a big reason I love the blues is because it’s improvised and there’s always room for some creativity. Most of the blues bands I came to love all had this sense of “anything could happen” and let’s just “go for it.”

Learning From The Concert

So whenever I go to any concert or show now I always try and learn something. Sometimes if the band is not so good I learn what not to do. I try and figure out why the band does not move me. Is it the playing? The groove? The arrangements? What is holding them back from being great.

And that’s the eternal question isn’t it?… What makes a band great?

That’s really what we all want to do isn’t it? Play in a great band.

By that I mean… The guitarist is only going to be as good as the wave they’re riding. That wave is created by the band behind them, particularly the rhythm section. If the wave is not clean and strong then they won’t get a very good ride.

There’s no doubt that I play better when the rhythm section is strong behind me. If the band can create a “swell” behind me and move up and down with my lead, then the song will be good. If not then I will probably sound flat.

And this is what the Allman Brothers were great at. The whole band moved with Duane or Dicky, and that’s a big part of what made them great. They listened closely and also understood how to create tension and resolution in the music. All great music moves from tension to resolution and back again, both harmonically and dynamically. And that’s the subject of this page if you are interested in what I mean.

Check this out to see what I mean. This is actually the continuation of the video above.

Listen to the best live concert recording ever!